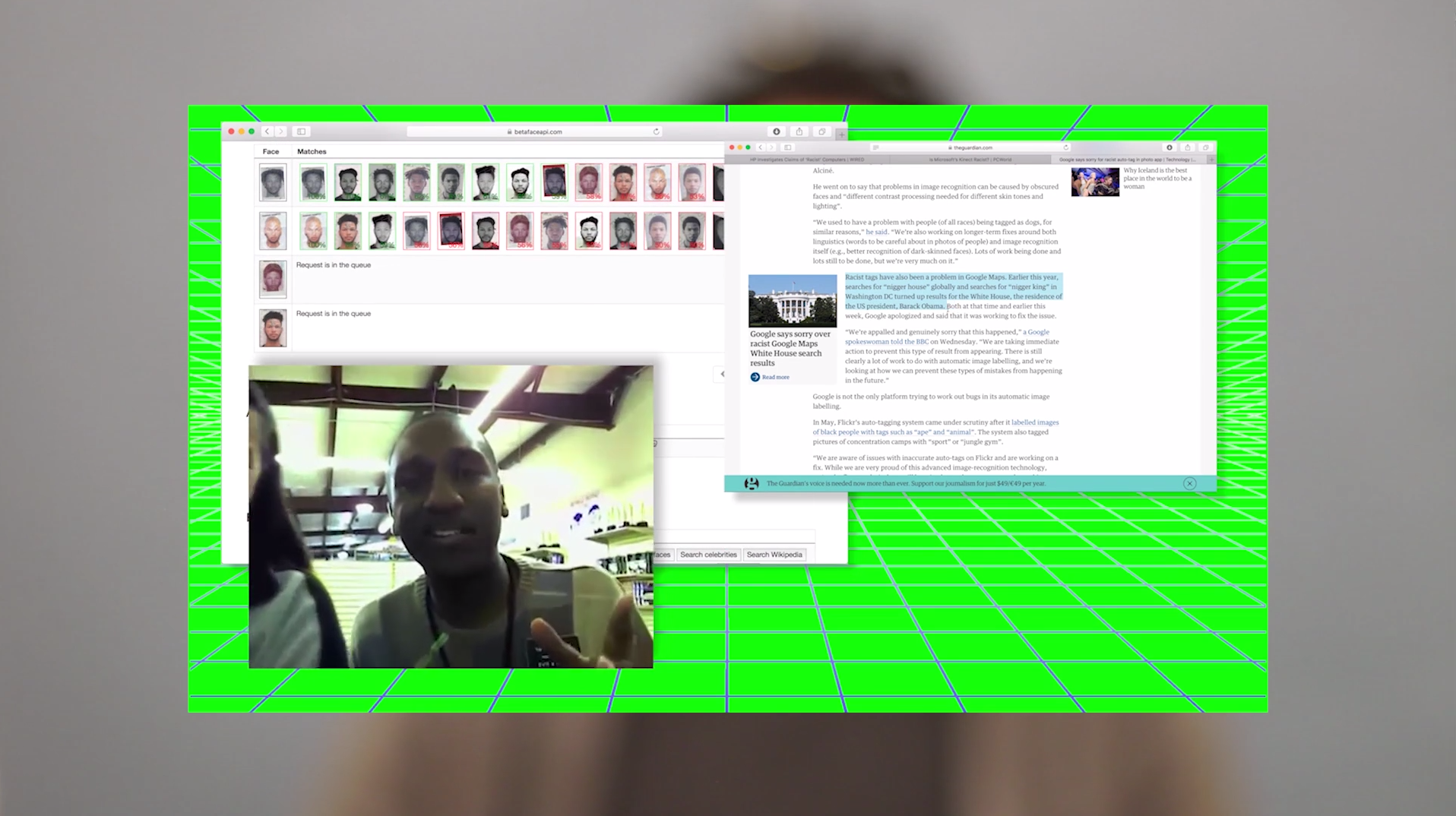 Introduction.
This paper serves as a sketch for an experimental political cartography of stack-world. A world inscribed by planetary-scale computational infrastructure in which telecommunication network infrastructure is overlaid directly on a neo-colonial meta-infrastructure of an equal scale. This paper explores the notion of borders and borderization through the implications of what Benjamin Bratton describes as the the dramatic re-inscription and reinforcement “of state sovereignty and supervision over information flows” within a globalized computational infrastructure.1 This idea of state supervision is parsed through an expanded notion of borders, in which zones of control are articulated as a form of representation and informationalization of bodies. This paper looks at the ways in which these data-bodies form a techno-political apparatus of governance which is contiguous and continuous with colonial and racist techniques of control across time and place. Reading this techno-social apparatus through Bratton’s description of the dynamic between the archaic and the emergent, this paper explores correspondence of these protocols to what Cameroonian philosopher Achille Mbembe describes in post-colonial Africa as “[how] social-actors continued to have recourse to those legitimacies and lower-order institutions that they kept reinventing, thus providing these with new significations.”2 This research also explores the ways in which techno-apparatuses are themselves a means of techno-political resistance.

Borders.
It is important to highlight the border as key site in the globalization of computational infrastructure. The border is the both the laboratory and the field, the border is a site of surveillance technologies testing (before wider dissemination) as well the key site of their use. The border is also a complex signifier, a term whose over-articulation across legal, historical, biological, geographic (etc.) modes place it squarely within the scope of what Bratton calls an “accidental megastructure.”3 The thickening of juridistinctional complexity to account for overlapping systems of supervision.

In the face of this overdetermination, it is useful to refer to Étienne Balibar’s notion of the border as “dispersed a little everywhere, wherever the movement of information, people, and things is happening and is controlled.”4

In this dispersed space of the border we can also read what Mbembe describes as the disturbing object: “the desire for an enemy, the desire for apartheid, for separation and enclosure, the phantasy of extermination, today all haunt the space of this enchanted zone. In number of cases, a wall is enough to express it. There exist several kinds of walls, but they do not fulfill the same functions.”5

In this light, markers of what constitutes a border exceed all conventional notions. It is simply the control over movement: of information, of ideas, of people, of plant and animal life, of goods that is key to identifying the sites of this exploration. It is also important to keep in mind Balibar’s council that, when we discuss borders “In reality, what is at stake here is the definition of [the] modes of inclusion and exclusion.”6

The body and the image / Resistance
Frederick Douglass: recently described by President Trump as “somebody who’s done an amazing job and is getting recognized more and more.”7 Was the most photographed US American of the 19th century. Born a slave, Douglass was a writer, orator, and leader of the abolitionist movement. Douglass is notable for many reasons, but it is his relationship emergent technology of the photographic camera and the representational form of the photo portrait which both offers us an insight into the production and subversion of borders through technology itself.

In his essay “Frederick Douglass’s Camera Obscura” Henry Louis Gates Jr. identifies chiasmus as a favorite literary trope in Frederick Douglass’s writing and activism. For example “You have seen how a man was made a slave; you shall see how a slave was made a man.”8 According to Gates, Douglass employs chiasmus rhetorically to reverse the world’s order, the order in which the associations between “slave” and “black” and “white” and “free” appear to have been willed, fixed, and natural. This literary device places Douglass literally at the point of partition. Between the state of slave and freeman is an ontological boundary, and it is at this boundary that Douglass performs his reversal.

Gates describes the apparatus of the camera obscura as the optical counterpart of chiasmus, the mechanism that reproduces, rotates, and reverses a scene, transforming it into an image inverted across 180 degrees. While the camera obscura forms the proto-technical basis for the photographic image, it is through the medium of photography itself that Douglass pursues what Gates describes as a “war over the representation of the black subject.” 9

We must acknowledge the audacity of Douglass’s more than 160 self-commissioned photo portraits. A paltry number in relation to our hyper-production of images, but considering that his earliest surviving photograph was taken in 1841, only two years after the introduction of the daguerrotype, and that his main competitor for the title of USA’s most photographed 19th century person is US President Abraham Lincoln, it is an incredible statement of intentional manipulation of a technological and representational form within a political struggle.

Here it is necessary to invoke Mbembe’s account of the mechanism of colonialism: “In order to exercise a durable project on the native people they had subjugated, and from whom they wanted to differentiate themselves at all costs, the colonists had to somehow constitute them into various kinds of physical objects. In this sense the whole game of representations under colonialism consisted in turning the natives into a variety of typical or type-images.”11

The regime of type-images and image-making against which Douglass contended was, within both abolitionist and pro-slavery modes, what Gates called “the astonishingly large storehouse of racist stereotypes that had been accumulated in the American archive of anti-black imagery, the bank of simian and other animal-like caricatures meant to undermine the Negro’s claim of a common humanity, and therefore the rights to freedom and citizenship and economic opportunity.”12

These stereotypical images must be thought of in terms of Foucault’s notion of governmentality: the immanent discourses, techniques and architectures that constitute the objectivity of the modern subject 13 or as Mbembe puts it in regard to contemporary security barriers “every feasible means is put to work in order to impose a regime of separation.” 14

These regimes of separation form the archaic authority against which emergent apparatuses define themselves: at some points in opposition to the archaic and at most other times as essential collaborators with the archaic, yet persistent regime.15 Mbembe reinforces the nature of these archaic-emergent relations when he describes the disruptive étatization (state domination) of colonial societies as paradoxically “achieved through the old hierarchies and old patronage networks.” 16 However through the emergent form of the photo portrait Douglass advanced a surplus of counter-images of himself within a new mode of production and reproduction of images which had not yet been mobilized into the whole of game of representation and control. Gates describes this more poetically when he says of Douglass “he seized upon those long-exposure glimpses of black and majestic human forms, miraculously generated by the chiastic magic of Daguerre’s camera obscura, to fabricate—to picture—the very images through which, at long last, the Negro as anti-slave could emerge” 17

We can read Douglass as an intervention into the system of photographic image production, using it as a means of advancing a political project of resistance, not simply publicizing a political agenda but mobilizing the emergent technology itself as an agent of political change, an oppositional force making a claim over the monopoly of delineation, a break with a regime of separation intimately tied to the perpetuation of type-images.

However, this same technology of image-production provided the means for Alphonse Bertillon, a 19th century French policeman, to develop the mug shot, a uniform set of protocols and an apparatus for posing and taking portrait photographs to produce standardized images of criminals and suspects. 19

The mug shot in itself was only a single element in his system of anthropometry, a system of measurement and quantification of physical characteristics for the identification of individuals. This system, based on eleven key measurements, introduced a statistical regime of standardization and indexicality into the identification of individuals, which introduced both the idea of an average man, a type-image, and the individual data-body, a series of files connected to and shadowing actual bodies, or what we now call the dilemma of big data.20

The techniques of biometric quantification and identification pioneered by Bertillon, while for a time overshadowed in criminology by finger print and DNA identification directly form the basis for facial recognition algorithms applied to images from security cameras. Algorithms take distances between key points of the face and compare them statistically to a known database of images. Bertillon used eleven measurements in the 19th century. Today, machines use hundreds of facial points per frame.21

This informationalization of criminal bodies prefigures the general shift in governmentality from territorial boundaries to social boundaries already embedded in data-images and image data—a notion analogous to Mbembe’s prejudiced image-types which “largely corresponded to the debris of [their] real biographies” or “imagined material, an entirely artificial secondary status of psychic objects came to be fixed onto their primary status as authentic human persons.”22 For Mbembe, this doubling is necessary within “a regime of separation whose functioning paradoxically depends on an intimate proximity with those who have been separated.”23

Databodies.
In her analysis of European internal border controls, Magdalena König describes how the “power to divide into societal in-and outsiders is shifted from territorial towards socio-digital borders”24. The borders are themselves produced by transnational surveillance networks which “increasingly show patterns of social sorting, that is obtaining data to classify people into risk categories such as citizens, migrants or potential criminals.”25

German theorists Lena Ulbricht and Maximilian von Grafenstein remind us that “[s]urveillance studies have, for instance, pointed out how individuals and social groups are dominated in their life chances by their ‘data doubles,’ as constructed on the basis of their “activities, connections, performances, transactions, and movements.”26

In an article from November 22, 2016, MIT Technology Review revealed a successful effort by neural networks to identify criminals on the basis of facial photographs alone. This facial recognition algorithm “could correctly identify criminals and noncriminals with an accuracy of 89.5 percent.”27 This broad cartographical wandering privileges the agency of images at the site of the border. This should not be mistaken as a relegation of other agents of and at the border to triviality but rather an attempt to parse the image of the individual at the site of the border through what Balibar describes as “the symbolic stakes at work in the collective imagination: relations of force and material interest on one side, representations of identity on the other.”28

This work was presented as part of the 11th Visual and Cultural Studies Graduate Conference at the University of Rochester on April 6-7th, 2017.