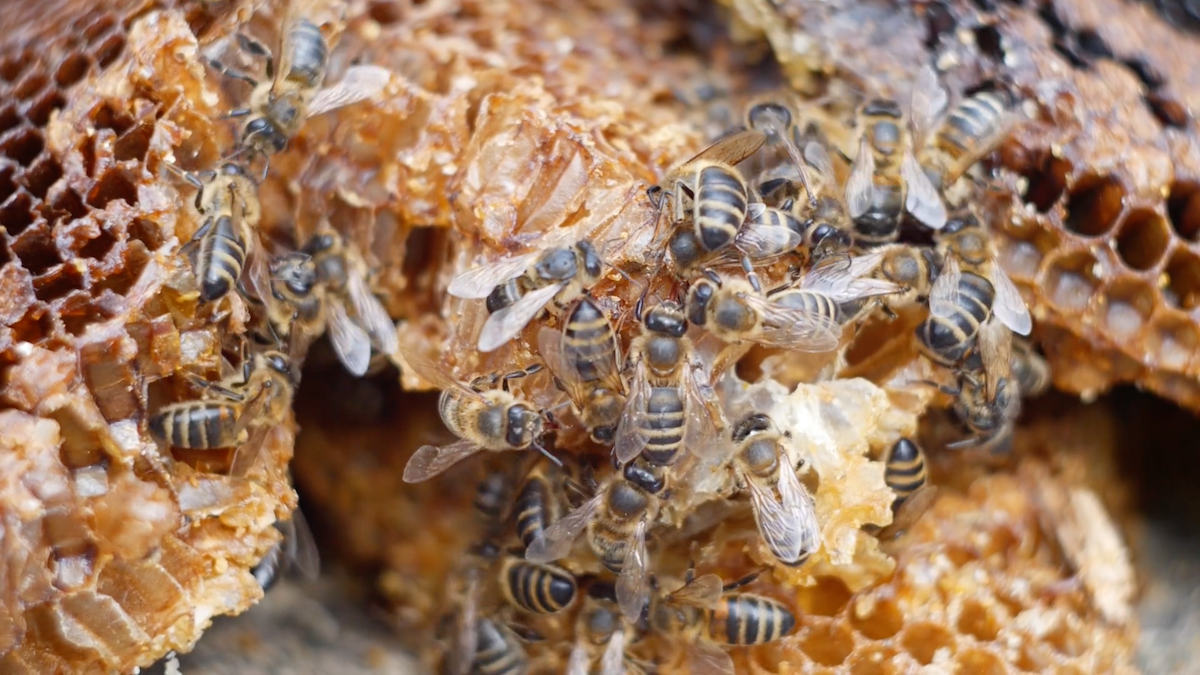 Humanity became the major geo-shifting force on the planet. The current epoch of the Anthropocene sadly affirms our disrupting engagement with the more-than-human world.1 The rates of endangerment among mammals, birds, reptiles, amphibians and insects, are overwhelming. Scientists have declared that we are living through the sixth mass extinction, although this piece of news is mostly unheard and unnoticed in our daily lives. Extinction as the backdrop to human life.2 A slow violence occurring “gradually and out of sight, a violence of delayed destruction that is dispersed across time and space, an attritional violence that is typically not viewed as violence at all”.3

Among the multitudes of agents enmeshed with us in multispecies relations, the position of Apis Mellifera, the honeybee, is instead highly visible. The honeybee is meaningful to us because our food production system is significantly dependent on their ecosystemic service of pollination. All bees belong to the order of Hymenoptera – ‘veil winged’ insects – which includes around 100,000 species, of which 25,000 are bee species. The social bees, among which we can find honeybees, bumblebees and various stingless bees, comprise a different family under the name of Apidae, within which honeybees constitute a sub-family, Apinae, consisting of just one single genus, Apis. There are four species in Apis: florae and dorata, none of them implemented in commercial apiculture; cerana (Eastern), cultivated in the past in China, and mellifera (Western), originated in Europe. Apis mellifera is currently the most commercialised species worldwide. There are twenty-four different races of Apis mellifera. Each one of them evolved in specific ecologic niches. Contemporary apiculture uses four races of Apis mellifera: a.m. carnica, a.m. caucasica, a.m. ligustica (Italian honeybee) and a.m. mellifera (British honeybee).4

The honeybees captured in the footage consist of both the Italian honeybee (Apis mellifera ligustica) and the Sicilian honeybee (Apis mellifera sicula), a honeybee that differs from the mainland Italian honeybee by the uniformly dark colour of its tegument. I was able to engage cinematographically with these nonhumans and their world-making projects during my ethnographic practice in the natural apiary of Danilo Colomela, a natural beekeeper in the island of Sicily, in Italy (May – November 2019). Danilo is a practitioner of a non-invasive form of beekeeping through the semi-wild conditions of life in his top-bar hives, grounded in “response-able” relations with the super-organism hive.5
In my cinematic multi-species project, against the indifference of the sixth mass extinction’s slow violence, I imagined the bees as the sensorial protagonists of the film-world. I imagined them buzzing, flying in and out, filling the moving images with their life presence. I envisioned to be able to express their positive vitality through their own lively agency as it appears in the film-world.

For Invisible Culture’s call for issue 32, “Rest and the Rest, Aesthetics of Idleness”, I prepared a short film edited from excerpts from my current work-in-progress In the natural apiary.6 The edited short film merges long take shots achieved through a specific aesthetical intervention, which I call the ‘ecoaesthetics of stillness’. In crafting this way of filmmaking, I turned to slow cinema and ecocinema, two fields that seem to draw near in recent years but have not met yet.7 Slow cinema has been simultaneously exalted as an alternative space beyond an over-saturated/stimulated media environment and discharged for its pretensions about what an artful cinema should look like. Ecocinema came to define all moving image media as appropriate ground for ecocritical analysis, while at the same time encompassing a wider range of styles, genres and taste cultures that may promote ecological awareness.8

The short film is composed of intertwining long takes of bees’ life in the natural apiary. The first ones comprise the shots of the honeycombs with the bees eating out what the natural beekeeper left for them. The second ones were made among the actual hives in the apiary to capture the ongoing flying in and flying out of the bees. Through the adoption of long takes, I wanted to mediate between the interplay of stillness and motion, capturing in that way the unfolding of the events within the apiary. For both shots I had to be corporeally close and still to the agentic forces of the bees. Such corporeal attunement within the landscape of the natural apiary was grounded in my “response-able” practice of filmmaking that led to the ecoaesthetics of stillness. I had to choose specific spots where I would not obstruct the flight paths of the bees, in awkward corporeal positions, adopting to the terrain that could accommodate my filming body. Corporeally still as not to worry the bees within the motion of this apiary and its landscape. I was filled with the vitality of the bees: stillness in movement, stillness in life. A vibrant stillness of the film-world amid the slow violence of the sixth extinction.