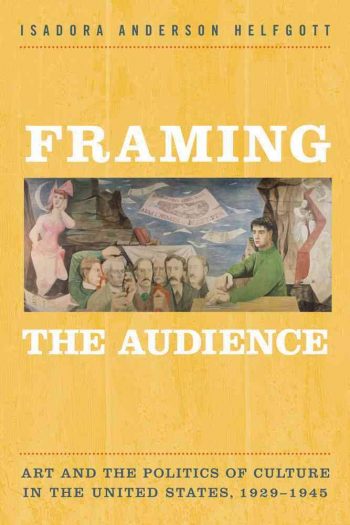 The culture wars of the years surrounding the 1930s are known for the many and well-fought domestic battles over high art, popular culture, and consumerism. During this era, the barriers between high and popular art upheld by centuries of tradition came crumbling down as leftist American artists worked to redefine the relationship between art and the greater society. Mass circulation of visual media gave 1930s Americans unprecedented access to art and, as scholars such as Michael Denning have argued, it would be during this decade that art gained a new power to create, challenge, and reinforce ideas about national politics, economy, and identity. While numerous scholars have focused their work on the art produced during this time, Isadora Helfgott’s Framing the Audience: Art and the Politics of Culture in the United States, 1929-1945 flips the focus onto the figures behind and beyond the works of art. By placing a critical focus on leftist artists, the art establishment, and the corporate sector, Helfgott uncovers the story of how the makers behind 1930s visual culture deeply influenced the consumption of art. Helfgott investigates the effects that audience appreciation of art, which was influenced by both artists and members of the private sector, had on American political, cultural, and social landscapes. She finds that the way Americans consume art today has roots in the culture wars of the 1930s.

Framing the Audience follows a logical organization, tracing the purpose of visual art as it evolves from a form used for collective, social change by artists, to one that serves individual, corporate interests within the business sector. Smartly, the text is divided into three parts, respectively focusing on the artists, the art establishment, namely museums and foundations, and the corporate sector. In part one, Helfgott highlights artist efforts to redefine the relationship between makers, their work, and the broader society. Using muralist Anton Refregier and his involvement with the John Reed Club as a case study, Helfgott shows how “social content artists” sought to bring socially-conscious art to the people for the purpose of cultivating societal change (29). Challenging the way American art had been traditionally appreciated, Refregier and other artists of this period believed visual art was no longer a cultural form to be observed passively by the social and political elite. Rather, art should concern collective, social criticisms that illuminated inequalities and would be available for viewing by broad audiences and accessible to all classes, not just the wealthy.

Parts two and three address how art establishments and the corporate sector imagined the purpose of visual art. According to Helfgott, while art establishments upheld the purpose of art as a tool for social change, they also used it for advertising and self-promotional purposes. Relying upon the Harmon Foundation and the Museum of Modern Art (MoMA) as examples, Helfgott explores how traveling exhibitions and mechanically reproduced images of art on postcards, posters, and books moved fine art from the realm of high to popular culture. The distribution of these images introduced art as a mass commodity for the first time. The Harmon Foundation’s exhibits displayed and sold the works of African American artists in predominantly African American neighborhoods. On one hand, this promoted greater accessibility to the fine arts across class and racial boundaries; on the other, it fostered economic security for African American artists through the sale of their art works. In addition, Helfgott argues that the Foundation’s exhibitions aimed to break down boundaries of racial segregation by encouraging racially mixed audiences.

MoMA also produced traveling exhibitions; however, in contrast with the democratizing impulses of the Harmon Foundation, it aimed to exert their cultural leadership over the art world by promoting the museum’s brand. MoMA created mechanically reproduced print materials, which allowed broad audiences to interact with and, for the first time, own likenesses of fine art. Yet, MoMA’s mass-produced prints were used as museum advertising, thereby linking education and fine art with self-promotion. According to Helfgott, MoMA’s printed reproductions “legitimized the idea that reproductions were suitable stand-ins for originals, particularly in the context of spreading cultural knowledge and familiarity,” which paved the way for the corporate world to interact with art in advertising and promotion, which is addressed in part three (145). Here, Helfgott closely examines how Henry Luce and his involvement with Fortune and Life magazines reveals how corporate sectors used print materials to convince the public that businesses had a meaningful role to play in the newly developing tradition of American art. Capitalizing on visual art’s new position as a mass commodity through circulating print materials, the corporate sector sought to harden the relationship between art and business by reinforcing the notions that art could only be appreciated if a culturally knowledgeable mediator, such as Fortune or Life, was there to teach and explain how art should take on meaning. Challenging leftist artist attempts to use art for social change, the corporate sector worked to reify traditional notions of art appreciation by producing advertisements and editorial panels of notable artists and their works that emphasized “the promotion of the importance of the Western canon, the critical role of wealthy collectors, and the sacralized space of American museums” (151).

Focusing on how art was appreciated, Helfgott uses the archive to determine why artists created the kind of art they did and evaluates what impact these changes had on how art was appreciated in the broader social, political, and cultural landscape. Helfgott’s analysis is supported by careful examination of a unique collection of artifacts, such as artists’ letters and diaries, art organization and establishment records, and print materials from critics and periodicals. Departing from traditional, formal analysis of actual art works, Helfgott uses these archival materials to focus on, as she states, the “rhetorical and organizational efforts of artists, art critics, museums, and a new kind of corporate art patron to reconceptualize the social basis of art with a view toward understanding the implications of both their intentions and their efforts” (12). Through this compelling use of the archive, Helfgott aims not to understand what a piece of art contains or implies, but rather how the art was brought to the American people and how that approach affected American culture. In addition, she is careful to place her discussion within the context of greater 1930s American history. Descriptions of New Deal legislation, the Great Depression and widespread economic concerns, the Communist movement of the late 1920s, and the emerging Popular Front serve as the backdrop to her story and are woven in throughout the text. The inclusion of this political and social context proves to be necessarily important to her argument.

By focusing on the figures beyond the artistic frame, Helfgott introduces a fresh, innovative, and thoroughly researched take on this period in American culture. The prose is well written, the arguments are persuasive, and the archival evidence is thorough. Overall, Helfgott compellingly uncovers the competing visions of how and why the audience for art was refashioned in America, showing the reader how art for “the people” was invented and how those visions continue to be imagined today.