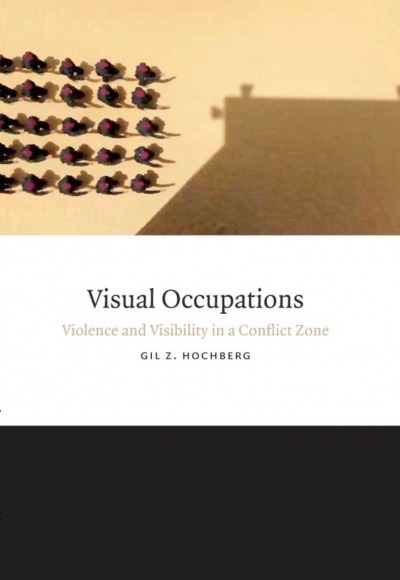 “There is, in other words, no war without the spectacle of war.”

In Visual Occupations, Gil Hochberg, Professor for Comparative Literature and Gender Studies at UCLA, sets out to examine what it is to see, what it is to be seen and what political potentials acts of vision might carry if brought into focus sharply enough. She “explores various artistic (cinematic, photographic, literary) attempts to expose and reframe the conditions of vision that underlie the Israeli-Palestinian conflict” (3), contextualizing and connecting Palestinian and Israeli artistic interventions with readings of specific military technologies, architectural forms, and mechanisms of control and resistance at different points in time since 1948. Through which visual configurations does this conflict appear, she asks in her introduction, and cautions her readers a few lines later against taking the “conflict as our point of departure,” instead urging them to “explore the very making of the conflict—its contours and mappings—by focusing on the distribution of the visual [and concern themselves with] the denaturalization of vision and the political construction of sight and visibility” (5). This very strong and almost exclusive focus on the visual that Hochberg maintains throughout the book seemed somewhat limiting to me at first, perhaps due to my own background in performance studies and my currently ongoing research on applied theatre practices in conflict zones. However, her careful and deep analysis of the uneven visual realities of the conflict opens up a space of critical contemplation that will surely inform my own research practices. Myself a writer much concerned with how much context a reader requires to follow the intrinsic dynamics of cultural production in a place that they might know little about, I thought it a valuable lesson to read such densely politicized and historiographically oriented descriptions that might very well be more generally understood as an introduction to the (visual) history of Palestine and Israel since the founding of the State of Israel in 1948. Hochberg’s own position—she was born in Israel, left as a young woman, and returned as a US-American researcher—clearly informs her need to ask questions about her “own blindness” (33), specifically, and “Israeli blindness” (163) more generally. Simultaneously, it allows her to speak with a political voice that has overcome this–also: her own–blindness, adapting much of the readily available and established discursive vocabulary and political position of rejecting the “Zionist separatist ethnonational ideology and colonial settler practices” (4) and, importantly, the “1948/1967 divide as a prevailing analytical framework” (5), without bluntly rejecting the possibility of engaging with critical artistic voices coming from within Israel. Looking at such works, her analyses are imbued with what she herself calls a “cautious optimism” (164). In her closing words, written shortly after the 2014 Gaza war, however, she returns to being more doubtful of a realistic political change, as she observes a “new mode of visualization,” a militarized life and vision “under the drones” (166). These closing words in retrospect frame much of the concrete artistic examples in the book as almost outdated in how they make visible a ‘human(-eyed)’ concrete reality of the occupation, in how they aesthetically signify, in how we with our human eyes and perspectives––however different those might be, politically speaking––might look at them, and how we might learn from them, politically and visually.

Hochberg structures and separates her inquiry into the visual field into three parts: Concealment, Surveillance, and Witnessing. Part I, Concealment, traces within the dominant Israeli visual field the place of ruins, specifically their place in literature, and in the work of Palestinian filmmaker Elia Suleiman. Hochberg considers the position of ruins as one of simultaneous invisibility and hypervisibility. Palestinian houses, villages, and infrastructures demolished during the Nakba and now partially incorporated and reshaped into pieces of Zionist narrative, continue to animate resistance to this narrative. They retain a haunting presence, because you cannot not see the disappearance that the ruins show, you cannot not see the strategies of concealment and impossibilities inscribed in them. Similarly, Palestinian citizens of the State of Israel, such as filmmaker Suleiman and many of his cinematic subjects are invisible and visible at the same time, holding a contested citizenship. Suleiman’s work is read by Hochberg as visualizing this invisible status while denying a restorative representation. The often silent observers in Suleiman’s films become visible in their subtle and quieter modes of resistance, rendering also more complex the violence-saturated images of Palestinian bodies that are always already a terrorist threat, already a spectacle of violence, already a part of a hypervisible “culture of death” that the Israeli image of “normalcy” depends on as a counterimage. This “possibility of rewriting the story” explored by and within the “generative poetic and political force of the image” (74) points to the unstable meaning of images as much as it challenges the “hegemonic distributions of visibility, which are always already subjected to a particular geopolitical and historical configuration” (75).

Part II, Surveillance, then explores the strategies of and counter tactics to surveillance and the Israeli military gaze as modes of domination in the Palestinian territories. Hochberg first offers a queer reading of Sharif Waked’s video installation Chic Point from 2003, an ironic rendition of a fashion show of clothing for men with easy visible access to their torso, contrasted with images of actual clothing being lifted at actual checkpoints. The reading centers on the relation between the body and the gaze, between “the body as an object of desire, and the perception of the body as an object of military surveillance” (91). The video thus explores how violence, desire and, spectatorship intersect, not in the encounters at checkpoints alone, but in how we as spectators, as viewers, likewise are implicated in fantasies and desires. The gaze as an apparatus of control continues to be examined in the following chapter which deals with the works of photographers Rula Halawani and Khaled Jarrar. Hochberg attests that both are trying to articulate Palestinian political agency through their photography. Halawani is achieving this by means of an image editorial intervention that refuses to display the exchange of a gaze inside the frame. Jarrar challenges the ‘normal’ visual field of the checkpoint by turning it into an impromptu exhibition space for photos of the same checkpoint. Hochberg engages both works in a productive dialogue with Ariella Azoulay’s thoughts on photography as a ‘civil contract,’ a direct communication between photographer, photographed, and viewer, a contract in which the spectator has to actively generate information surrounding an image, a plea for ethical watching.

Part III, Witnessing, held for me the most insightful and demanding analyses, reiterating some of the structures described before. It is concerned throughout with the question of whose suffering is (to be) made visible for whose profit or interest, put differently: “For whom are you shooting us” (115)? Both global media and local populations seem almost obsessed with making ‘the conflict’ visible to audiences elsewhere, to document violations, to make suffering visible, and to create evidence under the imperative to witness. Hochberg describes how Palestinian artists see their work as influenced by this ‘national’ “urge to inform”, which in many cases results in a “submission of art and imagination (fiction) to the pressing demands of producing evidence (documentary)” (116). Additionally, the ready availability of images of conflict and suffering runs the risk of “becoming a spectacle of sheer voyeurism” (117). In Hochberg’s analysis, both essay films Nervus Rerum by Otolith Group, and We Began by Measuring Distance by Basma Al Sharif allow to understand how the seeing of suffering in fact “secures no political intervention” (119). The Israeli visual regime allows for a permanent surveillance and visual production of Palestinian bodies as suspect of terrorism, whilst a global visual regime of human rights and NGO’s focused on rehumanization leaves the Palestinian subject a mere victim all too often. The tactics employed by these films is to reject visibility and to make this refusal visible. This notion of refusal remains for me one of the strongest political claims in Visual Occupations. The last chapter looks at Waltz with Bashir by Ari Folman and Lebanon by Samuel Maoz, focusing on the role of the (failed) witness of the Israeli soldier at war, whilst questioning, again and importantly, how to ethically film and watch war altogether, bringing into alignment a visual and political blindness, failure and forgetfulness. What does it mean to represent an “unwitnessable reality” (156)?

Hochberg takes her readers into different visual fields, at all times connecting the layers of political significance in an engaging and insightful way. To make the visual structures of political power seen, in themselves and in the artistic reflections looking back at them, allows for a multilayered and complex understanding of vision, visuality, and visibility as political instruments. Many of the examples in the book ask, in different ways, “how the militarized and colonial power of the Israeli state […] can become visible […] challenged, and perhaps undermined” (1-2). The answers provided point to different strategies and tactics of (dis)appearance. In this manner, these works “challenge and denaturalize the visual regimes that currently limit our common understanding of the conflict” (7), and in doing so, potentially allow for political transformation and empowerment to emerge.