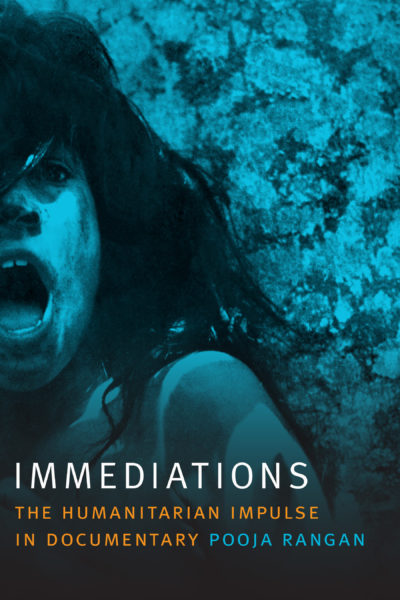 “What does endangered life do for documentary?”

This critical, and often overlooked, question is the point of departure for Immediations The Humanitarian Impulse in Documentary. In this book, Pooja Rangan, Assistant Professor of English in Film and Media Studies at Amherst College, articulates the paradox of participatory documentary and the problematic of “giving voice to the voiceless.” Rangan argues that the humanitarian impulse of giving the camera to the other is an ideological act. The gift of the camera appears as an invitation to the dehumanized other to claim and take up their position as a member of the community of humanity, however it doesn’t go far enough to engage the problematics of how we define the community of humanity, or how we can expand what we conceive of as the human/e. Crucially, this question of how we conceive of the human/e presents itself as a core concern of this book (158). Rangan’s neologism, immediation, emphasizes how immediacy is overdetermined and mediated through a primarily western liberal lens of what it means to give voice and humanity to traditionally dehumanized and disenfranchised subjects. Humanitarian media in this sense aims to save the lives of those who have been stripped of their rights and their humanity. What Rangan proposes is that such ritualized immediations may allow for the disenfranchised to claim belonging, if not to fully realize it (193).

Rangan’s study claims that the humanitarian impulse in contemporary participatory documentary is anchored in the Griersonian humanitarian mission, the ethos of which prioritizes a form of emergency thinking and a documentary method that privileges “action over thinking, ethics over aesthetics, and immediacy over analysis” (3). In this vain, the participatory documentaries that Rangan writes about seek to empower dehumanized subjects using common and potentially flawed tropes of urgency and immediacy at all costs. According to Elaine Scarry and Craig Calhoun emergency thinking is a modern condition that is experienced as incidences of catastrophe escalate. It is a reaction to temporally specific moments that emerge from seeming normalcy such as war or environmental crisis, or a response to a situation where lives seem to require rescuing from a threatening position as in children who experience precarity or illness (3). Emergency thinking requires a humanitarian response as opposed to a political one because there is simply no time (10). Thus, humanitarian media that responds to a crisis aims to save the lives of those who appear to have been stripped of their rights and their humanity (158). Immediations “aims to theorize how emergency is mediatized and to reinforce the notion that reading emergency against its humanitarian justifications is a political act” (10).

Immediations acknowledges classic and traditional documentary theory. However, the strength of Rangan’s analysis comes from her engagement with feminist structural critiques of documentary and the seminal works of scholars such as Trinh T Minh-ha and Fatimah Tobing Rony among others. Highlighting the need for contemporary documentary studies to take up the questioning of apparently inclusionary language such as empowerment and participation. Moreover, Immediations draws from disciplines as varied as Critical Childhood studies, Photography studies, theories of biopower and histories of violence, Critical Disability studies and Queer Theory, Critical Animal Studies and Posthumanisms. This multidisciplinary approach strengthens Rangan’s analysis and allows her to engage several key questions throughout: How does documentary render suffering humanity immediate? What aesthetic, formal, and narrative tropes does it invent to generate the sensations of temporal urgency and direct spatial presence? How are the effects of these representational conventions made to seem immaterial, secondary, or even irrelevant when it comes to the ethical mandate of saving lives?

Despite this broad range of influences, Rangan is precise in her writing and maintains a clear structure throughout that allows the reader to follow her argumentation and analysis closely. She is explicit in her intentions and the grounding of her theory, providing well-formulated introductions and conclusions to each chapter.

The book is organized into four chapters and sub-headings and each chapter has one primary case study that leads her analysis. Chapter one, “Feral Innocence: The Humanitarian Aesthetic of Dematerialized Child Labor,” takes up Zana Briski’s 2005 film Born Into Brothels, a film that documents the efforts to save the children of sex workers in Calcutta from a similar fate. Briski was also inspired to teach the children to use a camera, to take pictures for the purposes of documenting and witnessing their own surroundings. This chapter confronts the myth of childhood innocence and who is deemed worthy of rescuing. Rangan connects Francois Truffault’s The Wild Child, early ethnographic work, and contemporary representations of child advocacy to explain concepts such as pseudoparticipatory documentary, feral innocence, and the “humanitarian impulse to salvage childhood” (20). Rangan argues that we should read the images produced by the children as emblematic of how affective and creative labors are not recognized or compensated as such. In this case, the images produced by the children under the guise of a selfless humanitarian act to “rescue” the innocent child from their environments require their labor. We are required to acknowledge the complicated humanity of children as “encapsulating the condition of the neo-liberal laboring subject” (29).

Chapter two, “Bare Liveness: The Eyewitness to Catastrophe in the Age of Humanitarian Emergency,” questions the testimonial codes of documentary by looking at examples of participatory social media or citizen journalism in order to question what it takes to be made visible at all costs. This chapter is concerned with the emergence of the humanitarian emergency as live media event. According to Rangan, the humanitarian live media event brings together two optics: (1) the humanitarian emergency, whose suspension of politics brings what has been called “bare life” into the purview of governance; and (2) the televisual discourse of catastrophe, which promises a suspension of the conventional forms of televisual mediation in favor of documentary contact with the real” (66). Rangan’s critique in this chapter, while targeting neoliberal policies, privatization, and structural failures of disaster relief also questions critical theory’s confidence in participatory media as a site for the biopolitical struggle against dispossession and the persistent fantasy that forms of participation result in an empowered user as opposed to a passive observer. According to Rangan, the participation required of the dispossessed and marginalized means that they take all the risks and it is the exposure of their bare-liveness that provides, according to Mary Ann Doane, the “ultimate drama of the instantaneous” (73).

Chapter three represents the boldness of Rangan’s study by leading us to question what place “voice” continues to hold in documentary despite the work of scholars attempting to dismantle the codes of representational realism over the years. The very problem of giving voice to the voiceless is troubled even more when hierarchical forms of communication are questioned. In this chapter, titled “Having a Voice: Toward an Authentic Counterdiscourse of Documentary,” Rangan explores what it would mean to free documentary from its entrenched realism and the insistence on a literal voice to claim that a human is present. Rangan performs close readings of three films in this chapter. Firstly, I Am Autism, a fundraising video directed by academy award winner Alfonso Cuarón, secondly, Autism is a World directed by advocate Geraldine Wurzburg in collaboration with Sue Rubin, the writer and autistic subject of the film for CNN, and finally In My Language written, directed and published on YouTube by Amanda Baggs, a videomaker, blogger and person living with autism. Reading these films, Rangan develops three types of voice in this chapter. First, the dominant voice is defined as imagining the hegemonic norms that view autism as a deficit, mirroring the medical mode of thinking. Second, the resistant voice harkens back to the previous chapters as a mode that seeks to enable and give voice as resistance by appropriating the dominant modes. The book argues, acknowledging the foundational work of Trinh, that it is the discourse of tolerance and inclusion under neoliberalism that maintains dominant narratives and notions of what it means to be human and upholds that visibility is the currency of dominant order. Finally, Rangan develops a theory for an autistic voice. This mode affirms a more dynamic and expansive experience of communication, while simultaneously broadening our considerations of what it means to be human.

The final chapter, “The Documentary Art of Surrender: Humane-itarian and Posthumanist Encounters with Animals,” asks what to do when making visible isn’t enough and further to that isn’t even ethical. How can documentary and documentary makers question what it means to perpetuate regimes of visibility? By focusing on animal portraits Rangan shows how the recognition of the self pervades documentary forms in an anthropocentric way reinforcing normative discourses. Here she cites Agamben’s “anthropological machine or machine for the reproduction of the human,” as well as Foucault’s work in Discipline and Punish reaffirming that “visibility is a trap.”

Concluding the book with a chapter on animals reinforces the impulse of Rangan’s project here; questioning the “human.” What Rangan has accomplished is a “more far-reaching approach to media ethics that opens up the horizons of humanity rather than presuming them in advance” (15). Rangan provides a precise and accessible theory of the aesthetic and political implications of the audiovisual tropes mobilized when documentary is in emergency mode, and “rescuing” marginalized bare-life is posited as a priority. Ultimately, Rangan succeeds in paving a way “toward a more radical ethic of reflexivity in participatory documentary that surrenders to and takes its cues from the relational modes of the other, instead of bringing them into the humanist enclosure of the politics of visibility, and its implied vision of subjectivity and agency” (169).