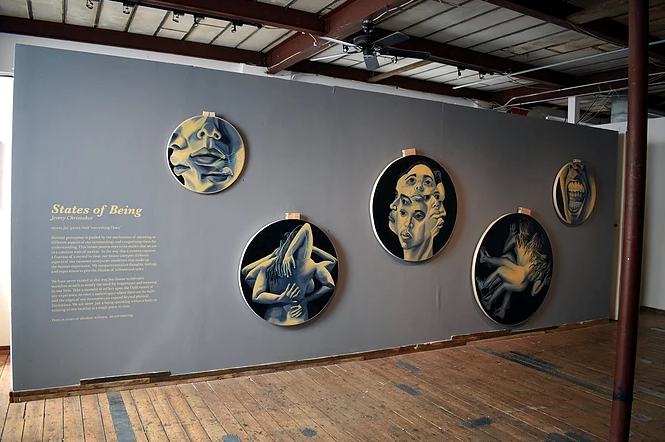 Jennifer (Jenny) Christakos’s Senior Thesis Exhibition States of Being opened on April 6th at the Yards, a collaborative art space within the bustling Rochester Public Market. Located upstairs from Java’s Cafe, the Yards provided a showcase for three senior Studio Arts majors (Alex Cunningham, Bri Landwersiek, and Jennifer Christakos) throughout April. Each of the artists transformed one corner of the space with their artworks, which enabled fascinating dialogues.

When I first entered the Yards, my attention was immediately captured by Christakos’s States of Being, which consisted of five round paintings hung on an expansive grey partition wall, with the artist statement at the left corner. All in similar tones of indigo and navy, in high contrast to light amber, they formed a series of striking depictions of the human body. Painted with acrylic, the canvases appeared in various sizes, the biggest of which was 48 inches in diameter and the smallest 23 inches. All the paintings featured the finishing touches of cyan embroidery floss, which created ghostly doubles of the painted shapes. Permeated with a sense of uneasiness and agitation, States of Being interrogated the complexities of the perception of both the world and the self.

It is evident that in the artist’s mind, states of human existence are grounded in corporeality. On Christakos’ canvases, mouths, teeth, faces, hands, arms, legs multiply themselves and fuse with each other. Set off against a black background, the body parts are rendered in stark highlights as if exposed under examination lights. The body becomes the point of penetration into the mind. In the painting Thriving, a widely opened mouth reveals rows of teeth nested inside one another. Embroidered contours of another set of teeth reinforce the seemingly infinite multiplication of teeth. Like a floating spectral presence, the embroidery adds a new dimension to the painting, not simply because it protrudes from the surface, but because its disembodied forms seem to suggest a break from corporeality. Our discomfort of viewing not only comes from the grotesque depiction but also from the difficulty of identifying the ambiguous emotions embedded in the multiplying teeth and tense muscles—is the figure roaring, scolding, screaming, laughing, clenching teeth, or all at the same time? As viewers, we cannot help but question our own cognition, which is always a single slice of an ever-changing reality. By giving corporeal shapes to elusive emotions, States of Being forces us to confront the fluidity of human experiences and the uncertainty of perception. 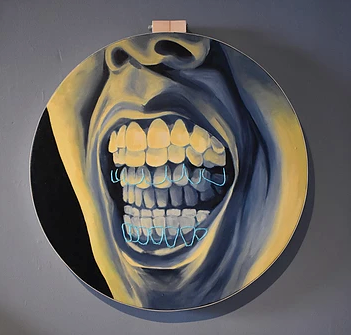 “Even in times of absolute stillness, we are moving,” says Christakos in her artist statement. Indeed, through multiplying shapes and lines, Christakos animates her paintings to the point of giving us a sense of vertigo. In Having, which is the largest and the only painting in the series that shows the body in whole, a naked woman lies face down on a black background. Her body is twisted and her limbs bent, as if crammed into a tiny dark room enclosed by the round frame. Her torso is divided into threes and her legs into eight, in addition to another two legs outlined by embroidery floss. She seems to be struggling up and down, groping for something unknown, giving the impression that she is about to rotate the round canvas and lose herself in the whirl. In her constant yearning and searching, she only finds herself turning in circles.

Therefore States of Being calls into question not only our perception of others but also of the self. The blind desire shown in Having is more salient in another painting Hoping, in which a woman tries to scratch an itch on her back. Her insatiable longing can be seen in her multiple arms that go up and down, but none of them is able to relieve the itch—even the embroidered arm does not help. Hoping is an excruciating self-interrogation of individual existence. What and where exactly is the itch of life? Yet such a question leads to no easy answer. As shown in two other paintings, Wanting and Waiting, multiple mouths open in different ways and faces turn in different directions simultaneously, indicating the impossibility of self-coincidence. Our minds flow perpetually, just as “πάντα ῥεῖ” (“everything flows”), a Greek phrase with which Christakos opened her statement. In the famous aphorism of Greek philosopher Heraclitus, what follows “πάντα ῥεῖ” is in fact “no man ever steps in the same river twice.” In States of Being, the multiplication of body parts also multiplies the anxiety of not finding oneself in the same place. 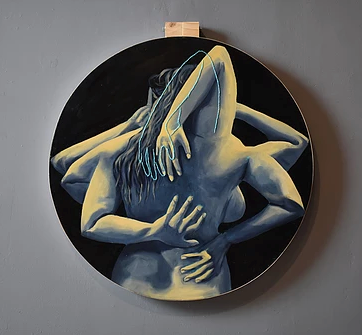 However, despite its rather somber vision of human existence, States of Being is more of a courageous confrontation than a cry of anguish. It is an invitation to reflect on the reality we habitually avoid and dismiss. For Christakos, creating art is a form of self-caring and self-therapy. As she writes on her personal website,

My artistic practice began as an outlet for my mental illness. Now it has become as important to me as the air I breathe. I begin with a simple idea based purely in aesthetics. Then, as I begin to create, new possibilities present themselves in the form of ideas. I am excited by the uncomfortable and try to cultivate an appreciation for discomfort within my artwork. Taking time to appreciate all feelings, even those that are unpleasant, as integral parts of the human experience.1