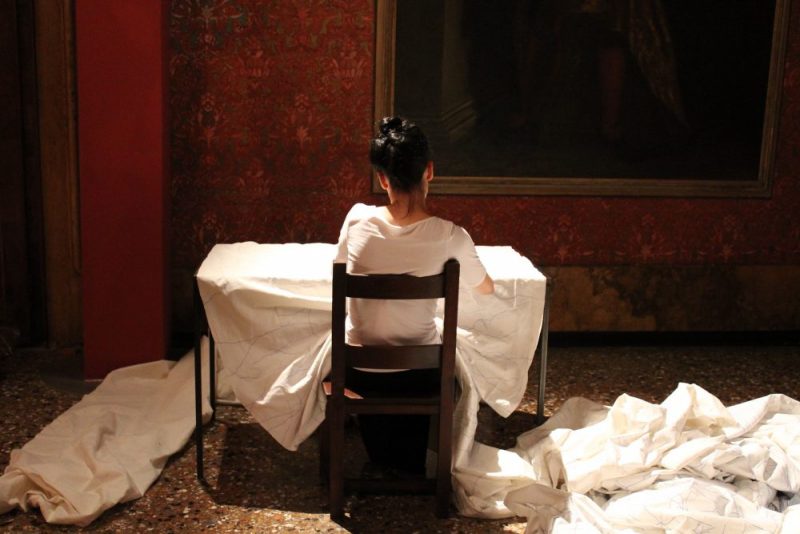 A satellite exhibition of the 56th Venice Biennale, My East is Your West was presented at the Palazzo Benzon, whose interior architecture of adjoining rooms, narrow corridors and cordoned-off, dimly-lit spaces suggested a mise en abyme of thresholds and crossings. Commissioned by the Gujral Foundation, conceived by its Director Feroze Gujral, and curated by Martina Mazzotta and Natasha Ginwala, the exhibition juxtaposed Pakistani artist Rashid Rana and Indian artist Shilpa Gupta’s respective explorations of geographical divides and subcontinental tensions. As nations locked in postcolonial conflict for much of the second half of the 20th century, neither India nor Pakistan has had the privilege of a permanent national pavilion at Venice, making this a particularly pointed curatorial pairing.

Choosing to deploy a method of appropriation, Rana covered two walls with pixelated digital prints of two canonical works from Western art history: Caravaggio’s Judith Slaying Holofernes (1598-99) and Jacques Louis David’s Oath of the Horatii (1784), recomposed by Rana as part of a series titled Transpositions (2013-15). The surface of enlarged and missing pixels distorted and dissolved the images into a seething mass of fractured forms, turning them into something almost grotesque. Similarly, My Sight Stands in the Way of Your Memory, (2013-15) was cleverly constructed from thousands of clips of video footage sourced from popular media and CCTV displayed on tiny screens whose aggregate formed the Caravaggio image. Yet, rather than offering an astute postcolonial critique, the citing of European paintings as shorthand for the evils of empire came across as doctrinal. Furthermore, appropriation of art historical imagery with minimal modification is a technique associated with 1980s’ postmodernism (Sherrie Levine’s appropriation of photography by Walker Evans comes directly to mind, as does Cindy Sherman’s appropriation of paintings by Caravaggio and Raphael), and Rana’s strategy seemed somewhat anachronistic in this context. 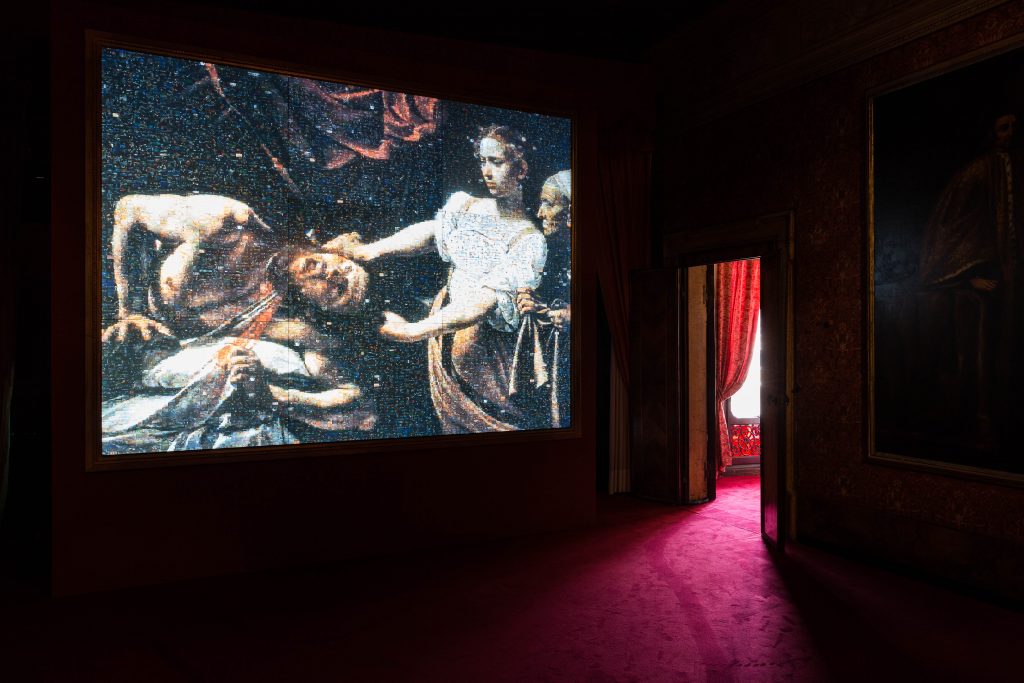 Rashid Rana. My sight stands in the way of your memory. 2013-2015. Single channel projection and nine-channel video on nine monitors. Photo by Mark Blower.

More engaging was Rana’s interactive video installation Asl-e-Shuhuud-o-shaahid-masshhuud (Viewing, Viewer and Viewed) (2015), which juxtaposed real-time video recording of visitors to the Palazzo Benzon with visitors to a replica room built in the Liberty Market in Lahore. The rooms’ confusion of Occidental and Oriental locale, original and copy, played on the colonialist cliché that subaltern cultures might be civilized through being modeled on the motherland. Themes of mimesis and alterity worked effectively here.

Nonetheless, Rana’s work suffered by comparison with the sophistication of Gupta’s, whose series of conceptual pieces on the subject of illicit trafficking and clandestine border crossings between India and Bangladesh were potent and subtle. Collectively framed as Untitled (2014-15), the various media included delicate drawings, text-based works, and artifactual remains. The text-based drawings dexterously charted a fine line between content and absence, information and enigma. Made using an apparatus all but defunct in the western world (a typewriter), the text works relied heavily on the use of negative space. In Drawings made with Phensedyl: codeine based cough syrup, illegal in Bangladesh and legal in India, the typewritten text nestled beneath the upper edge of the page – the remainder left blank – and heralded a small suite of delicately schematic drawings whose graphic forms oscillated between abstract mark-making and intimations of hand-drawn maps that provisionally indicated a journey’s route. With nothing signposted or named, the drawings remained suggestively elusive. 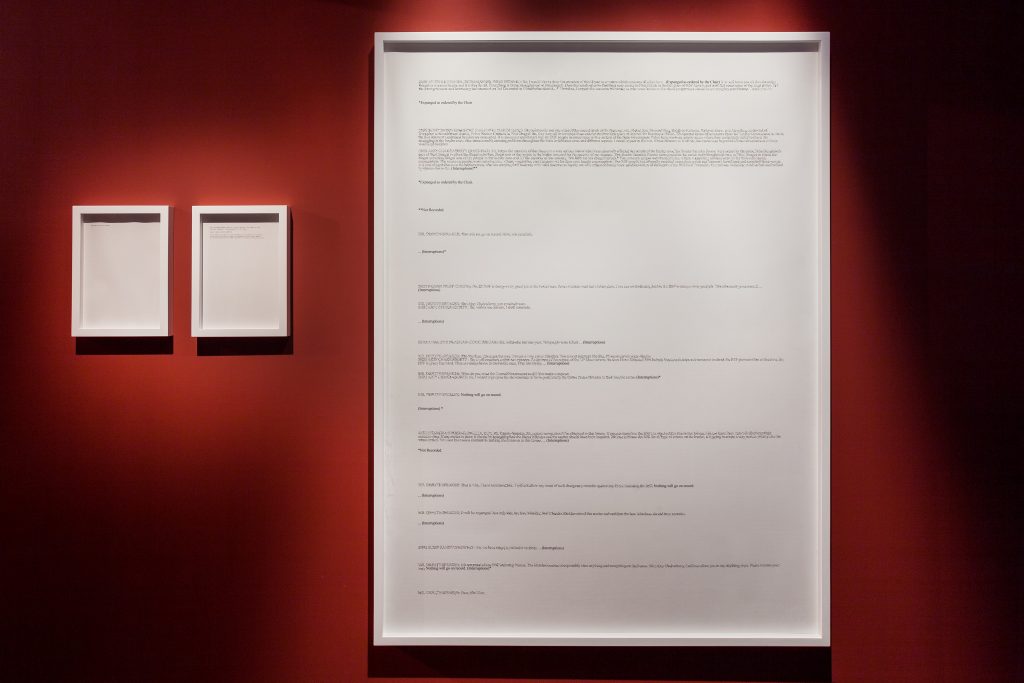 The compositional logic of negative space continued in a powerful work based on a Winter Session of the Indian Parliamentary Debates held in 1999. The case, as the text noted, drew the Government’s attention to the incident of the execution of five innocent villagers in Coochbehar district of West Bengal by the Border Security Force (BSF) Personnel. Spread across a large paper sheet, whole sections of the Debate’s transcript were gouged out in compliance with a court decree. The blocked sections were “expunged as ordered by the Chair”, and rendered illegible. The wall on which the untitled work hung – painted a deep blood red with an unmistakable connotation of violence and murder – spoke where the words did not.

In place of language, Gupta’s emphasis on materiality represented an attempt to make the artifact speak: a wooden spool whose textile strips were torn from a saree, and elsewhere, crushed fragments of white porcelain arranged in a museum vitrine. The presence of the shards corresponded to a trader’s statement in another panel that detailed the dangers of illicit border crossing of cattle, justified by the lucrative prices gained per herd. The text panel informed the viewer that porcelain with a high percentage of cattle bone ash (almost 50%) gives it a distinctive and desirable hardness and translucency, making ceramics a highly marketable commodity. 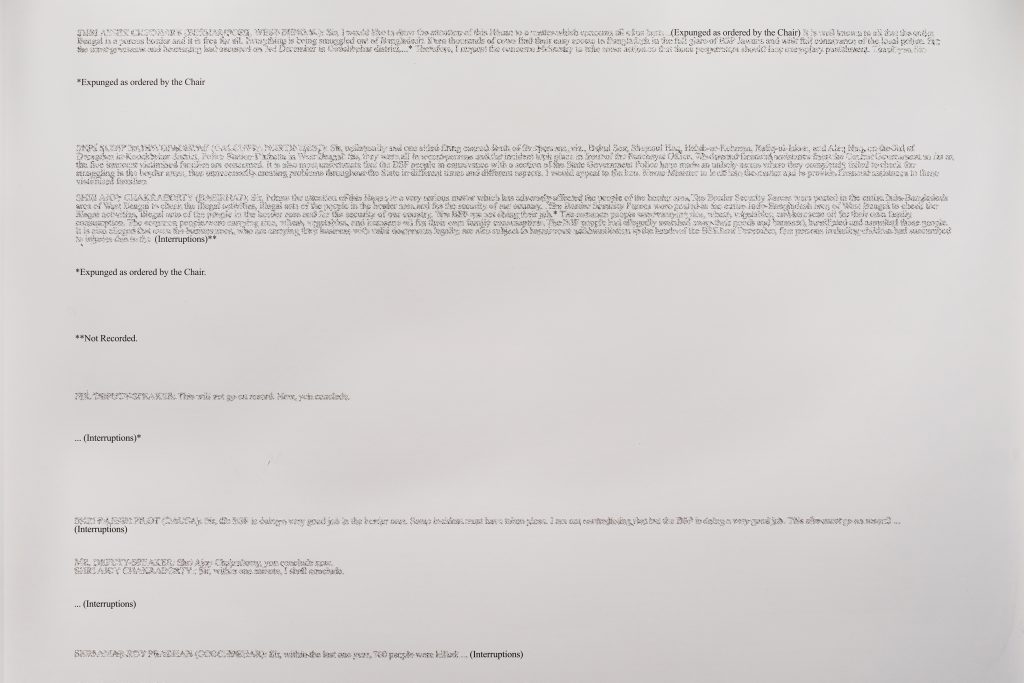 Gupta’s performance work 1.998.9 (2013-ongoing) was the centerpiece of My East is Your West. Intermittently scheduled over the exhibition’s duration, this involved a rotating performer who sat at a desk meticulously tracing lines through a sheet of blue carbon paper onto a piece of cloth that measured 3364 meters and was hand-woven in the Indian-Bangladeshi border town of Phulia. The accompanying text panel conveyed the fact that the barbed wire fence border stretching between East Sunderbans and Teen Math – designed as a deterrent to smuggling – is at 3360 km long, practically the same length. Seated midway between two enormous mounds of the single length of cloth, the performer (over the course of the performance’s duration) gradually pulled the huge pile of plain cloth across the room to form an increasingly voluminous second mound whose fabric surface was embellished with a network of manually traced fine blue lines. The work’s abstraction – the fact that the countless hours of labour remained buried within the soft folds of cloth – seemed to testify to the arduousness of journeys, whose hazards are known only to those who undertake them. The vast accumulation of hand-drawn lines obscured within the textile mound lay concealed like hidden moments to which Gupta’s work, metaphorically and schematically, acted as witness. 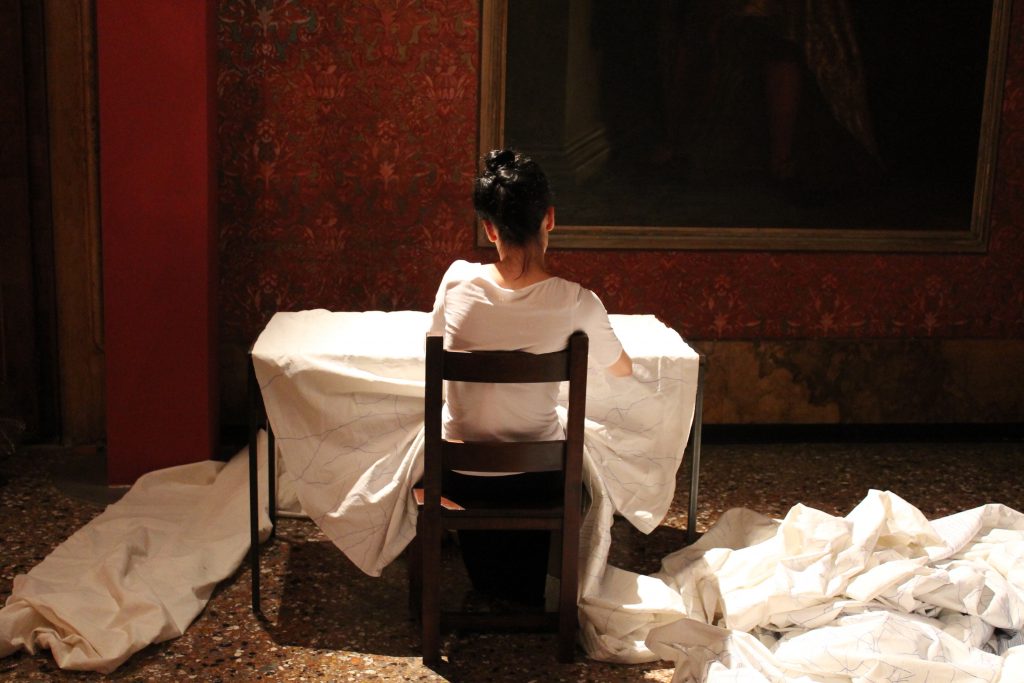 The cultural theorist Irit Rogoff observes that in borderlands, conventional rules and identities no longer hold: the border becomes “a site of evacuation in which the ‘law’ of each identity does not apply, having been supplanted by a set of contingent ‘rules’.’[i] Similarly, Homi Bhabha asserts that clearly defined binaries or polarized states of political consciousness dissolve at borders into heterogeneous conditions whose circulating signs are layered with indeterminacy. Moreover, for Bhabha the border is a zone whose complex trajectories of traffic and cultural difference is actually marked by panic; it is “panic which reveals the borderline experience.”[ii]

Primarily deployed in his analysis of forms of Indian colonial and postcolonial resistance to British rule, Bhabha’s concept of the border as characterized by a heightened state of trepidation is apposite to both artists’ engagement. Rana’s repositioning of Judith’s act of murder and Gupta’s narrated details of furtive border crossings both testify to forms of rebel agency: risky actions and furtive journeys, where the stakes are high and can result in detention, violence or death. Patriotism to the point of death or the ways in which the law abrades in boundary zones are intimated by the artists as the effects of nation states – making borders inadvertent danger zones. More obliquely however, the colonial and postcolonial politics of nation states and borders as theorized by Bhabha have further resonance. In the space of the border, the colonizer and the colonized are mutually transformed. The tense and uncertain terms of engagement result in necessarily hybrid terms. That identities in these liminal spaces are neither pre-determined nor fixed implies an irreducible dimension of mutability and performativity to border terrain.

Although ostensibly operating in two very distinct registers, Rana and Gupta shared an interest in the signifiers of territorial displacement and the performative gestures that effect forms of cultural hybridity. Their works were linked by a mutual urge to explore national faultlines, contested histories and zones of peril: for two artists from nation states beleaguered by political antagonism, this was a propitious collaboration.