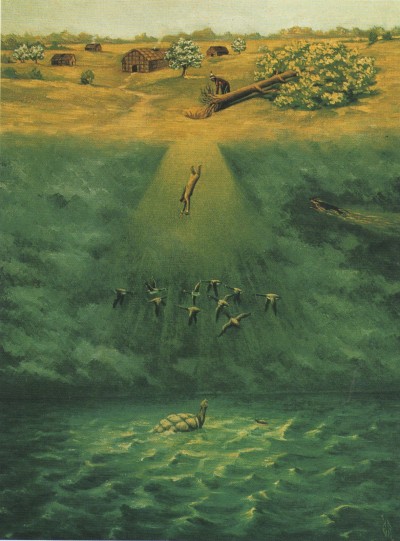 When a young, pregnant woman fell through a hole near the uprooted Celestial Tree above the dome of the sky, no one knew where she would go. The world below was inhospitable to her, covered in water. As Sky Woman fell, duck-creatures carried her on their wings to rest on the back of a great turtle. A muskrat then emerged from the water carrying a bit of soil from the sea floor. Smearing it on the back of the turtle, the earth grew wider. Sky Woman walked across the expanding ground, beginning Seneca inhabitance of the earth.1 In 1936 when Ernest Smith completed his painting of the Sky Woman diving into a dark and watery world, many people believed Seneca culture continued a long fall. Centuries of encounter deeply affected pre-contact Seneca culture. The dispersal of land holdings, introduction of Christianity and flooding of Seneca world with new goods all impacted the character of daily life.

Finding deep fault with the effects of settler society on the Seneca world, Director of the Rochester Museum and Science Center Arthur C. Parker (Seneca) launched a program to revitalize the internal workings of Seneca culture.2 Parker believed that engaging with forms of American culture had only “suppressed racial genius” among the Seneca.3 From 1935 to 1941 the Project supported the reproduction of historic Seneca material culture—clothing, jewelry, ceramics and masks. Ernest Smith also created a series of works that depict Seneca stories and everyday practices in a European style of painting. The Rochester Museum administered the Seneca Arts Project, while manual production of objects took place on the Tonawanda and Cattaraugus Reservations in Western New York. With federal funding from the Temporary Emergency Relief Administration, the Project hired 68 people in its first years. With funding from the Works Progress Administration in following years, the Project would expand to employ over 100. By the time the Project ended Seneca people created about five thousand reproductions of earlier objects. Parker hoped these copies would engender a broader cultural regeneration. 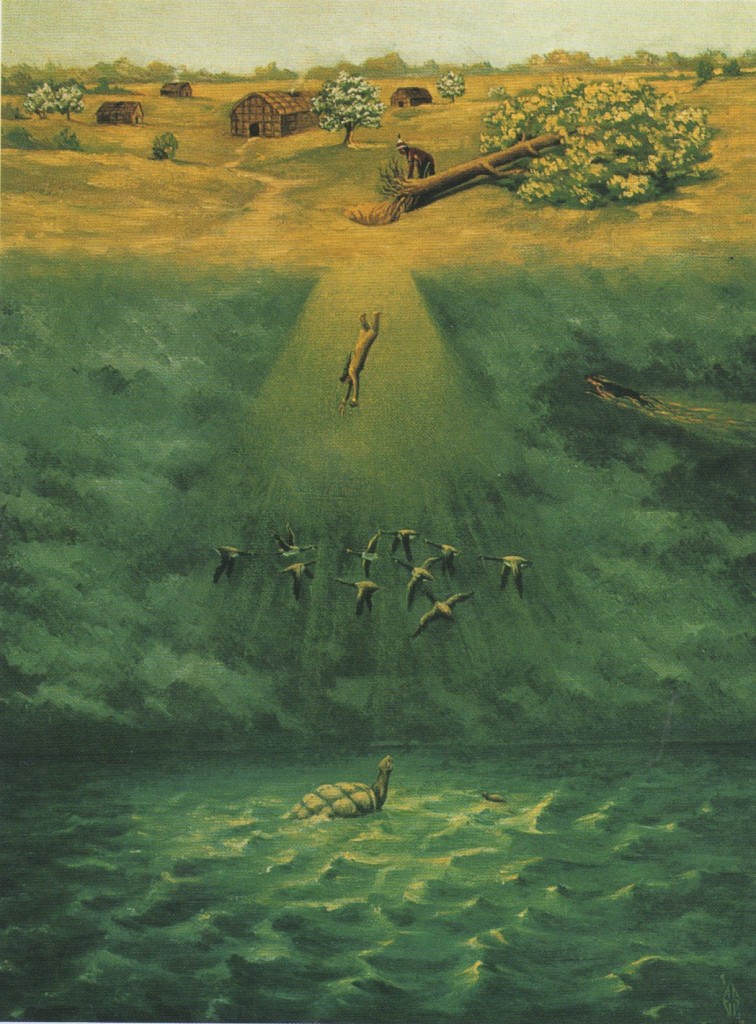 To counter an erosion of knowledge about Seneca forms of making, artists with the project turned to community elders and to historical examples of their material culture in New York state museums. The reproduction of burden straps shows how Seneca people used the Project to transmit knowledge across generations. Woven from strips of elm or basswood, burden straps allow individuals to haul extra weight—game, equipment or wood—on their backs. As early as 1849, anthropologist Lewis Henry Morgan noted that burden straps were “falling into disuse.” By 1935, Sarah Hill was one of the only Seneca people who knew how to make burden straps. Following Hill’s instructions, Everett Parker learned to weave. He became one of the most prolific twentieth-century Seneca weavers of basswood. Everett Parker preserved knowledge about historical Seneca burden straps as he wove them to carry culture into the future.

In addition to the person-to-person transmission of knowledge, craftsmen with the Seneca Arts Project studied photographs and historical objects from the Rochester Museum and the Buffalo Museum of Science to recover knowledge about designs and technical dimensions of objects. Ethnographies by Lewis Henry Morgan, Arthur Parker and those appearing on the pages of the Annual Reports of the Royal Ontario Museum of Archaeology further augmented Seneca understanding of mythology, social structure and material culture.4 Parker qualified such supplemental resources, writing that their use was limited and peripheral to a project that functioned primarily to “assist in bringing out the innate ability of our Indian workers themselves.”5 According to Parker, such supplemental sources were used only rarely and in order to remind Seneca people of knowledge resident in their blood.

Federal policy on Native Americans shifted dramatically during Franklin Roosevelt’s administration. In the last decades of the nineteenth century, well-meaning reformers lobbied the government to open boarding schools, break up collective Native land holdings and “uplift” indigenous peoples through other integrationist practices. By the 1920s, however, activists, artists and scholars—including Arthur Parker—harshly critiqued such assimilationist policies, arguing instead that the government should protect “traditional” Native cultures. The sea change in federal policy concluded when Congress passed the Indian Reorganization Act in 1934. The Act prohibited future allotment of Native lands, re-established self-governance in Native communities and funded education in Native cultures for Native peoples. Months after Parker began the Seneca Arts Project, Congress passed legislation to establish the Indian Arts and Crafts Board (IACB), though money did not start flowing for the Board until January 1936. Administered by the Department of the Interior, the Indian Arts and Crafts Board set out to create sustainable markets for high quality Native-made goods, material that would also help reintroduce historic methods of production to Native cultures.

In her book A New Deal for Native Art: Indian Arts and Federal Policy 1933-1943, art historian Jennifer McLerran argues that the IACB modeled itself on the Seneca Arts Project, as well as earlier efforts to revitalize indigenous cultures in Mexico. The federal Board borrowed most directly from the Seneca Arts Project in its establishment of Native arts cooperatives. The Department of Interior inaugurated Indian Arts and Crafts Board cooperatives as a strategy for economic development. The government provided credit funds to enterprises in farming, logging and crafts. With craft cooperatives, the Indian Arts and Crafts Board advised groups in research and marketing. In Alaska the IACB managed seventeen native-owned cooperative stores, including the successful Gambell cooperative and Ketchikan Indian School cooperative. The Board supported the Shoshone and Arapahoe Craft Associations in Wyoming. And McLerran notes that in Montana, the Blackfeet Cooperative Association successfully flipped the market for Indian-style arts and crafts at Glacier National Park from imported to Native-made goods.

Yet the Indian Arts and Crafts Board pursued a multifaceted strategy. In addition to managing cooperatives, the Board sent field workers to Arizona, Oklahoma and New England to research historical forms of art and to help revive these forms in Native communities. The Board sponsored Indian Art of the United States, a groundbreaking 1941 exhibit of Native American art at the Museum of Modern Art. As general manager of the Indian Arts and Crafts Board, Rene d’Harnoncourt organized the exhibit. D’Harnoncourt later served as director of the Museum of Modern Art, from 1949 to 1967. From its preservation of Seneca forms of weaving to its effect on the Indian Arts and Crafts Board, the Seneca Arts Project marks a turning point in twentieth-century Native art. Consider, again, Ernest Smith’s painting. It combines Euro-American forms and Seneca narrative. Like the Seneca Arts Project itself, the painting shows that efforts to revitalize Indigenous cultures are most effective—despite Arthur Parker’s rhetoric of cultural purity and contamination—when they engage the institutions and instruments of settler culture selectively and on their own terms.