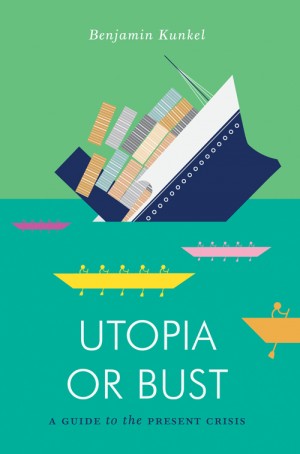 Benjamin Kunkel appeared in the news not too long ago. During the carnage in Gaza, the novelist-turned-“Marxist public intellectual” lay down on Second Avenue, adjacent to the Israeli consulate in Manhattan. Kunkel was one of two-dozen protesters, all of whom were awarded an afternoon in jail for their pluck. The scene could serve as the first act in a sequel to the writer’s debut novel, Indecision (2005), whose twentysomething protagonist, Dwight Wilmerding, gropes about life aimlessly before meeting a Belgian beauty on an eye-opening jaunt to the Ecuadorian Amazon. At her urging, and amid the wreckage of Latin American neoliberal “reform,” the antihero finally arrives at a decision, rejecting a life of apathetic self-indulgence and swearing an oath to democratic socialism. It’s at this juncture that the tale ends, and it’s hard not to see Kunkel’s public dissent in light of his protagonist’s imagined trajectory. Now, with the publication of Kunkel’s collection of political essays, Utopia or Bust: A Guide to the Present Crisis (2014), the link between life and art grows ever more intriguing.

The entanglement of the personal and the authorial renders Utopia or Bust a fun and pressing read. The book’s physical form is more reminiscent of a best-selling novel than a primer on leftist theory, and the interplay between Kunkel the public intellectual and Kunkel the real-life Dwight Wilmerding materializes as early as the cover. The reader is greeted by a tableau of a sinking cargo ship and a handful of peopled lifeboats bursting forth in fluorescent yellows, oranges, and pinks. But thanks to its flat, Bauhaus-inspired design, the fate of these lifeboats is ambiguous. Are these fluorescent “utopias” staying afloat or plummeting with their ship? Are we already drowning, or are we surviving a catastrophe together, requiring each of us to do our part in the paddling? Like Wilmerding, we are forced to choose between these two visions, between conforming to the reeling status quo or to abandoning and transcending it on collectivist terms.

As we follow Kunkel through engagements with a conspicuously white, male Marxian pantheon—a group that includes David Harvey, Frederic Jameson, and Slavoj Žižek—we become aware that leftist intellectualism is, in fact, all about making choices. Indecision is rarely tolerated. Each of Utopia’s essays poses questions we must answer: whether the cultural tendencies of late capitalism allow for avenues of self-reflection and genuine emancipation; whether increased socialization is compatible with security and prosperity; and whether state violence or financialization of the economy is the great culprit of our age.

Kunkel’s discursive craft reveals itself in a half-humorous story about meeting two Nepali security guards in Dubai ordered to guard high-stakes real estate. The punch line is that they self-identify as Maoists. When explaining why neoliberal powerbrokers tend not to acknowledge the existence of neoliberalism, Kunkel compares them to dogs not knowing their names so as to better evade their masters. Later on, in an acrobatic juxtaposition of Jameson’s Late Marxism (1990) and Jonathan Franzen’s novel, The Corrections (2001), Kunkel argues that “naming the system” no longer seems to have any real bite. Kunkel concedes, “With the brazenness of yuppiedom . . . all satire or cultural criticism met defeat.” In an age of shallow hedonism and hyperactive consumerism, he’s suggesting, lampooning the structural imbalances of power and class yields nothing but empty stares.

There seems to be a fundamental contradiction that runs through Kunkel’s thought, between the prerogative to name the system (and where one stands in relation to the system) on the one hand, and the futility or even absurdity of investing in said task on the other. Floating between novelistic ambiguity and political conclusiveness, Kunkel often hesitates to make hardened determinations despite his eagerness to take a stand. He promises his readers a more programmatic follow-up, but in the meantime, his essays—all previously published in the London Review of Books or N + 1—operate in the mold one might expect from a publishing collaboration between Verso Books and Jacobin. Kunkel marshals both the gravitas of the former, a New Left Review imprint, and the cool spirit of the latter, the “magazine of culture and polemic,” befitting his role as a sort of older brother to the newest left. Despite the whiteness and maleness of his subjects, one does turn the final page with a sense of youthful and refreshing promise, especially when the read is complemented with Verso and Jacobin’s other acclaimed release, Melissa Gira Grant’s Playing the Whore.

This is not to say Utopia or Bust is devoid of theoretical rigor or insight. Kunkel’s treatment of the historian Robert Brenner, for example, does justice to the intricacies of political economic theory while transferring it to the realm of the accessible and enjoyable. He counterposes Brenner’s appraisal of 1970s stagflation with the work of the Marxist theorist Ernest Mandel and the economist Michael Kalecki, all to the effect of forging a brilliant case on behalf of government-mandated full employment. None of this sounds very entertaining, but Kunkel makes it so, thanks in large part to a writerly dexterity and a cerebral charm.

The 1970s didn’t only mark a social or economic crossroads, but also an aesthetic one. As Kunkel dissects the philosopher Boris Groys’s attempted synthesis of Stalinist dialectical materialism and Marcel Duchamp’s “readymade (anti)philosophy”—an effort Kunkel suspects amounts to an “elaborate prank”—he comments, “Art in general and the visual arts in particular have more and more been defined by an omnidirectional spinningout of styles and tendencies, with the cyclicality of fashion rather than the forward charge implied by the term avant-garde.” It’s during observations like this one that the reader may hope for further discussion, which unfortunately never comes. And though it would be unfair to charge Kunkel with surrendering to an omnidirectional spinningout of styles and tendencies, it wouldn’t be entirely off base either. Yet perhaps this is not such a bad thing. As the author himself concludes,

“. . . the creative work of social transformation is mainly the task of amateurs, not experts. That is something to keep in mind while reading, and not only then.”