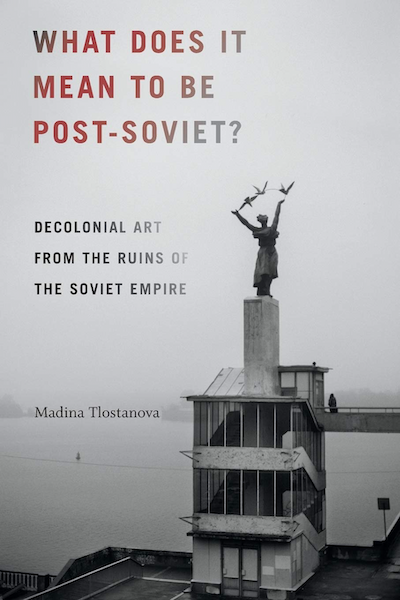 Madina Tlostanova. What Does it Mean to be Post-Soviet?: Decolonial Art from the Ruins of the Soviet Empire. Durham: Duke University Press, 2018. 145 pp.

Although the days of socialist realism have long passed, the wake of the fall of the Soviet Union and the Perestroika and Glasnost reforms still ripples through the contemporary Russian Federation, in ways that can be traced with particular precision through the region’s aesthetic production. This is the argument posed by Madina Tlostanova in What Does it Mean to be Post-Soviet? The book updates Andrei Sinyavasky’s question “What is socialist realism?” from the perspective of post-Soviet Russia, focusing less on socialist realism itself (though it does come up within its pages) than on the postcolonial condition that the contemporary Russian Federation states find themselves in, socially and aesthetically, in the aftermath of Soviet modernism and neoliberal globalization.1

Tlostanova begins by examining what makes the Russian “imperial difference,” as she dubs it, a unique condition among the colonialisms of Russia’s imperial rivals in Europe and North America. For Tlostanova, Russia has been historically marked by difference as an imperial power: different religions, languages, cultural traditions, economic models, and ethnic-racial classifications all contribute to a perception of the Russian Federation as ‘other’ to the European colonial powers. Russia was “never allowed to join the first league and become equal to Great Britain, France or the United States today,” writes Tlostanova (2). This difference, she contends, results in a “regressive turning of imperial difference into a colonial one,” which happens “when a second-rate empire, in the imaginaries of winning rivals, is regarded as a colony [and] starts to realize this status and react in aggressive and negativist ways” (2-3).

What this means for Russia today, according to Tlostanova, is a renewed colonial paradigm resulting in a “specific schizophrenia,” or an “imperial double-consciousness,” which leaves Russia “choking on its own rejection and fury addressed to both the stronger imperial rivals and the weaker colonial others.” This leads ultimately to Russia’s “futureless ontology,” a kind of suspended dialectic which keeps Russia’s destiny trapped in the historical desuetude of its Soviet past (3). Tlostanova’s diagnosis has parallels with Edward Said’s “Orientalism,” employed to define Europe’s discursive (aesthetic, economic, social, scientific, etc.) production of the Near East, as well as Toni Morrison’s “Africanism,” a term coined to describe how blackness is represented in the American literary tradition. In this way, Tlostanova’s notion of a “futureless ontology” accounts for both the historical and continued erasure of the cultures, and ethnicities in periphery states in the wake of Soviet modernism and the global neoliberal order which replaced it. Although it is imperialistic insofar as the resources and funding drained from the periphery states flow toward centers like Moscow, contemporary Russia is nonetheless caught between an ironically rejected imperialism and colonialism. Occupying neither position fully, Russia exercises a kind of powerless power, Tlostanova argues: a debased stature compared with European colonial powers resulting in a hyper-aggressive internal colonialism.

With these differences in mind, Tlostanova focuses on the ways in which contemporary art and “artivism” can “se[t] our consciousness free from the global neoliberal or local jingoistic brainwashing” (22). Chapter 1 does so under the sign of the “decolonial sublime,” while in chapter 2 Tlostanova borrows from Jacques Rancière, ruminating on the affective or aesthetic regime as a “sphere [that] remains one of the very few areas left for the construction of a positive identity”.2 Within this sphere Tlostanova locates a “specificity of decolonial drives in the post-Soviet space […] connected with their local histories and configurations of imperial difference” that combat the futureless ontology plaguing Russia’s periphery states (33). The aesthetic, thus, becomes a bastion of possibility in the face of Russia’s futureless future.

Tlostanova’s insights into Central Asian decolonial aesthetic practices comprise the bulk of the second chapter, which focuses mainly on Kazakhstani and Dagestani artists. One highlight is her analysis of Taus Makhacheva’s mixed material artworks, which unpacks the entanglement of the artist’s national and ethnic identity, space, place, and history as well as what Tlostanova describes as the artist’s “critical cosmopolitanism,” identifying Makhacheva as a “self-reflexive anthropologist-cum-artist” (51). For instance, Makhacheva’s Landscape (2013), a miniature mountain range composed of wooden noses based on copies of real Caucus inhabitants, plays with the fact that in the Avarian language, the word for “noses” and “mountains” is interchangeable.3

In Chapter 3, Tlostanova interviews Liina Siib, one of Estonia’s leading feminists, activists, artists, and curators. In this chapter, Tlostanova and Siib discuss femininity, womanhood and coalition, offering fascinating ruminations on Walter Benjamin, Michel de Certeau, Julia Kristeva, and Virginia Woof. Siib echoes the latter in her 2011 video and photo installation A Room of One’s Own, which examines the consequences of how “women and femininity are determined by space,” drawing parallels between communal flats in Soviet spaces and single-family homes in America (72).

In Chapter 4, Tlostanova interviews Uzbek artist Vyacheslav Akhunov on Soviet modernism in particular and modernism generally. Akhunov discusses the waning of the former; he claims he had once “imagined socialist modernism as an overcoming of the Soviet ideological limitations in art,” that “erod[ed] the boundaries between the hostile ideologies of the two struggling political and economic systems…becom[ing] the final stage in the development of socialist realism in the form of its negation and a possibility for the continuation of the history of Soviet art” (95-96). Akhunov offers his own diagnosis of the post-Soviet condition of art as the rise of representation over innovation, which accords with his views of the eclipse of (Soviet) modernism. Akhunov’s view is of great interest, as he describes how “the socialist tradition as we know not only destroyed all local models, but also carefully protected the common people and the artists from the alien social constructs and from some feeble efforts to build a new aesthetic reality” (90-91)—a double-edged sword punctuating the fixity or suspended dialectic identified in the book’s earlier chapters. In contrast to socialist modernism (Akhunov cites Kazimir Malevich and Vladimir Tatlin for instance), the “postmodern époque,” claims Akhunov, “smoothed out the boundaries between the so-called Eastern-oriented and Western-oriented artists,” resulting in imitation, “neocolonial mimicking,” and “second-rate if not third-rate…pseudo-cop[ies]” of Western art forms and styles at the hands of “ubiquitous Western cultural expansion” (93-94).

In Chapter 5, Tlostanova reflects on “Time, Space, and Memory” with Afanassy Mamedov, a Jewish-Azeri writer. Tlostanova describes Mamedov as a Russian author “whose prose is attuned to the global tendencies of transculturalism, cultural and linguistic creolization, playful negotiation of the global and the local, trickster-shifting identifications, and nostalgic spatial memories of non-Russian post-Soviet multicultural cities” (105). Comparing contemporary Russian authors to writers including Faulkner, Rushdie, Kafka, and Joyce, Tlostanova and Mamedov discuss the difficulties of translating the “multilingualism and multiculturalism” of Russian literature (106-112). One has in mind Vladimir Sorokin’s satirical avant-garde novel The Queue for example, with its plethora of local dialects and inflections and other nuances utterly lost in its translation to English (114).4

In her conclusion, Tlostanova returns to the notion of post-Soviet Russia’s “futureless ontology,” proposing a model of decoloniality which combats this reality by calling for the disruption of the “hegemony of modernity.” Like “the Amerindian tempo-local models,” writes Tlostanova, “the past is in front of us rather than behind us” (119). These disruptions of the linear temporal and historical progress of Western imperialism, as well as the Russian imperial difference that Tlostanova identifies, share a common vision of decolonial praxis, or the “emergence of decolonial drives” (123), as she calls them.5 These drives, according to Tlostanova, have the potential to delink and undermine the ideological and imperial forms that have sedimented into dominant social, cultural, and ultimately aesthetic forms.

Tlostanova is careful not to reproduce the simplistic postcolonial Prospero/Caliban dichotomy. Rather, she indicates confluences between the post-Soviet periphery states and other historical postcolonial situations from around the globe, borrowing from W.E.B. Du Bois, Frantz Fanon, Lewis Gordon, and others. At the same time, she describes the qualities that are unique to the Russian situation, identifying lines of clear solidarity between the Russian plight and others around the globe and through history.

Importantly, Tlostanova’s diagnosis of Russian situation is not prescriptive. As Fredric Jameson forewarned as early as the 1980s, the “history of Zhdanovite prescription in the arts” should make us hesitate before prescriptively addressing the question of aesthetic practice.6 Accordingly, Tlostanova’s work reads as neither a manual on artistic practice nor a survey of contemporary Russian arts, but rather as an inquiry directed toward unpacking decolonial drives and their unique capacity to combat the contemporary post-Soviet condition. As Mamedov puts it in Chapter 5, “prophesy is a thankless task and can even be dangerous at times”—and Tlostanova agrees wholeheartedly (117). Although she calls for “a merciless purging of the grand imperial myths” to finally do away with the “phantom pains of the amputated empire,” Tlostanova leaves it up to the artists themselves, in all their alterity from one another, to sort out the practical details as to how, giving them a platform to both discuss and theorize their own works and the larger problematic of post-Soviet aesthetics (128).