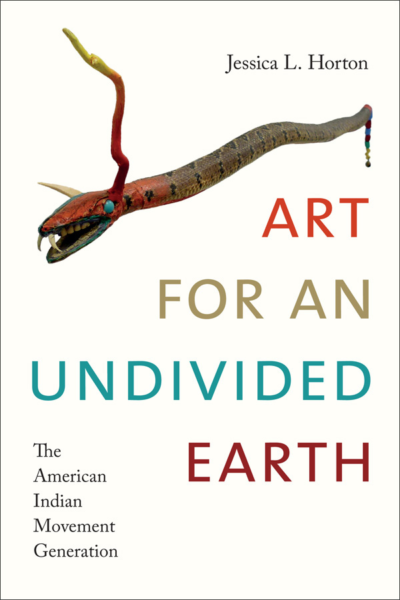 In the shadow and in the wake of settler colonialism, a parallel shape of the world arose from the standpoint of Native Modernism in the late 1960s, 70s 80s. Rather than conceiving an alternative to the hegemonic worldview of the colonial project, Native Modernism produced a universal vision of space undivided by discrete cultural and ethnic identities, emphasizing the shared albeit contentious ground of the unfinished project of modernity. This universalism runs counter to the oft-described fragmented modernities endorsed by proponents of identity politics; rather than assume the position of each fragment of Walter Benjamin’s famous broken vase metaphor, Native Modernism focalizes the undivided core around which each fragment vacillates, as well as the network they compose in relation to one another.1 Jessica Horton’s Art For An Undivided Earth is perhaps the most involved and in-depth study of Native Modernism to date. The author departs from analyses of Native American art which champion the rote path of identity politics and tend to reduce Native identity to mere ethnography, focusing on the -ontological significance of  American Indian art in response to Euro-American colonialism. Horton successfully situates American Indian Movement (AIM) generation artists within the ‘spatial turn’ paradigm, doing so in a refreshing manner: although she acknowledges “the recently popular interdisciplinary trend of ‘new materialisms,’ in which scholars theorize the vibrancy of matter,” Horton does not capitulate fully to the demands of vibrant matter, noting how “sharing concern with material agencies across disciplines feels overdue” (156) for scholars of Native American arts, opting for “a transcultural materialism suited to an undivided earth” (157). Thus, the goal of Horton’s book is not to endorse “a linear development toward a future, but as a reintroduction to modernity’s shared ground” (19).

The era of the American Indian Movement (AIM) was marked by a critical, social and revolutionary body of politics. In response to centuries of dispossession, displacement, broken treaties, boarding schools, legal and extralegal violence, AIM activists sought to raise awareness and modulate the continuation of these conditions of oppression. Activists occupied federal lands which had gone into desuetude like Alcatraz Island in 1969, had a stand-off with FBI agents at Wounded Knee, South Dakota in 1973, and, as the culmination of an organized march called the Trail of Broken Treaties, ransacked the Federal Bureau of Indian Affairs office in 1972, renaming it the “Native American Embassy.”2 This series of occupations calls attention to the spatial antagonisms at the center of AIM, which in turn became inscribed in the aesthetic practices of AIM generation artists, “bolster[ing] and broaden[ing] AIM-era spatial struggles within [their] historiographical provocations” (2).

The book is composed of five chapters, each dedicated to the spatial praxes employed by individual artists such as Jimmie Durham, James Luna, Fred Kabotie, Kay WalkingStick, and Robert Houle. The first chapter surveys Durham’s life and work, reassessing the artist’s “formative role within the ‘AIM Generation’ to emphasize shared historical and conceptual terrain, rather than a cohesive or contested identity” (17). Late in the chapter, Horton anchors Durham’s aesthetic developments in the artist’s sculptural works and bricolages (Mataoka Ale Attankulakula Anel Guledisgo Hnihi [Pocahontas and the Little Carpenter in London] (1988), Current Trends in Indian Land Ownership (1985), and Tluhn Datsi (1984)) against Fritz Scholder’s Massacre at Wounded Knee (1970), writing, “[i]f Scholder’s canvases promise ‘real’ Indians, Durham’s ‘artifacts’ frustrate the search, leading visitors in an endless loop of imperfect information: too little to cohere, too much to trust… the materials circumvent the ethnographic promise of fixing Indian identity to cast into relief Western practices of collecting, ordering, and displaying colonized peoples” (32). Scholder’s Massacre at Wounded Knee is an expressionistic portrayal of Chief Spotted Elk (Lakota Sioux), based on the widely circulated, iconic photograph of the Chief’s frozen corpse in the snow at the 1890 Massacre at Wounded Knee. By “not fully resurrect[ing] Spotted Elk,”  Horton argues that the Scholder keeps the figure “trapped in an impasto field of white splattered with flecks of expressionistic flecks of brown and red, dirtying the transcendent space” (29). However, in the opinion of this reviewer, Horton gives Scholder’s work short shrift: Scholder’s depiction functions as a kind of wake for the fallen chief; a dignified second death within the particular spatial and aesthetic parameters insisted upon by the artist, intended to counteract the colonial-era photograph of Spotted Elk’s downed body. Although Scholder may not have depicted the ‘real’ Indian as he claimed to have, he perhaps gets closer to rendering the Indian real—a kind of particular manifestation of the Lacanian real. Despite this minor disagreement, by contrasting the works of Native artists in such a way, Horton is able to avoid falling back into as the empty container within which artists like Durham and Scholder are alleged to coexist, allowing the ontological consequences of their works to come into focus in the foreground.

In Two and Three, Horton goes a bit further back into history, explicating the works of Pablo Tac and Fred Kabotie respectively. In the case of the former, Horton examines Tac’s legacy through the installations and performances of James Luna. Horton’s appraisal of Kabotie’s iconic paintings depicting Hopi Kachinas, marks the highlight of the book, as it offers the reader a radical interpretation of the well-known static, white backgrounds of Kabotie’s otherwise kinetic subject matter, arguing that it “plays a critical role in correlating relationships between figures and receiver… the unarticulated space between Kabotie’s figures is neither a passive ground for the figures nor a metaphysical void; it is a flexible material that invites the active participation of viewers” (106). Horton understands the blank backgrounds of Kabotie’s works to be a plastic substance, able to coordinate movement between viewer and subject.

In keeping partially with the theme of dance, Horton’s fourth chapter details Kay WalkingStick’s sketches and paintings which were in large part produced after her visit to the Vatican archives. Horton describes “art history’s tangled legs” (123) through WalkingStick’s oeuvre, noting how her “sketchbooks entail both the discovery and creation of resemblances among transformational beings drawn together in a nonhierarchical field of relations” and how they “reprise an imagination of the globe mapped through expanding Renaissance trade and conquest” (128).

In chapter Five, Horton transitions to Robert Houle’s installations and painted works, the portraiture of Eugène Delacroix, and George Catlin’s Indian Gallery, critiquing the latter’s “foregroun[ing] of the subjectivity of the painter, rather than the authentic natives, as origin” (160), observing how native subjects in Catlin’s work “became caught in a limbo of ontological uncertainty” (161). For Horton, Houle, by contrast, sought to ameliorate this uncertainty by filling in “what was missing from a dominant art historical genealogy, namely the agency of indigenous subjects and objects…[and] open[ing] up invisible colonial wounds for healing” (167, my emphasis). Horton ends the book with a kind of ode to stones, and thus to materiality as such, offering a poetic encomium thereto “as steadfast in dire times, that collectively map a temporally, spatially, and materially connected world” (186).

From the contemporary matrix of problems facing indigenous people in America and abroad—Murdered and Missing Indigenous Women (MMIW), the Dakota Access Pipeline, the continuation of the degradation and conditions of deprivation of Native American life on and off the reservation, to alcoholism, and the disproportionate incarceration rates of Native people—Horton’s work accomplishes a much needed reevaluation of the art which budded out of the AIM and Red Power generation.3 With Art For An Undivided Earth, Horton asks viewers of indigenous art to reconsider the function of art and the aesthetic more generally; rather than limiting the Native perspective to a feature of Native identity, Horton insists that a universal view of reality is rendered accessible through the project of Native Modernism. In this way, Horton’s work is a valuable resource for advanced undergraduates through professional-level academics, but is a required read for anyone pursuing Native American scholarship in museum studies, archival studies, and art history, or any other discipline which calls for a deeper investment than the identitarian/ethnographic approach which too often reigns supreme.