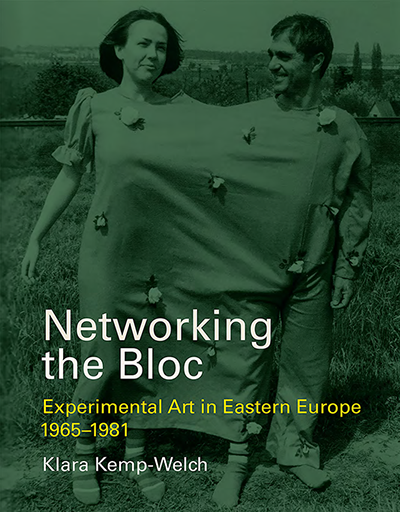 The theory of “Six Degrees of Separation” (or perhaps more humorously known in pop culture as “Six Degrees of Kevin Bacon”) contends that humans are all connected to each other by six or fewer acquaintances.1 The theory-turned-parlour game was introduced in 1929 by Hungarian author Frigyes Karinthy in his short story Chain-Links. Karinthy posited that with growing communication and travel, friendship networks would expand regardless of the distance between humans; the result being that via this growing network, social distance would also shrink.2 Working within this anecdotal theory as a method of analysis, Networking the Bloc: Experimental Art in Eastern Europe 1965–1981 highlights how experimental artists in the Soviet bloc during the 1960s–1970s engaged with artists and movements both inside and outside Soviet satellite nations (2). Through extensive research and well-documented archival materials ranging from artist testimonies and letters to press releases and images, author Klara Kemp-Welch offers an insightful and refreshing account of Eastern European experimental art and the many ways global networks were forged amongst artists throughout the bloc.

With the hope of obfuscating the assumption that the Cold War’s three zones – Western, Eastern, and nonaligned – were each running disparate parallel art worlds, Kemp-Welch formulates a narrative that instead transcends such limits by showing an open and complex web of connections. The author suggests the importance of an “art world” situated throughout the bloc that saw through the act of distribution and connection a means to overcoming alienation (4). By dividing her investigation into three phases – “Mobilization”, “Points of Passage”, and “Convergences” – each section forms a multiplicity of links showing how ideas circulated and related to wider Cold War-era questions concerning people and power.

In “Mobilization,” the author introduces readers to several instances between 1960–1972 that highlight creative exchanges across the bloc and abroad. Here, Kemp-Welch features an example which she will revisit throughout the book: NET, a nine-point manifesto created by Polish artists Jarosław Kozłowski and Andrzej Kostołowski in 1971 (Fig. 1). Adopting the form of an artist proposal and doubling as a networking tool, the manifesto was mailed within and outside of the bloc to artists and art theorists, prompting a free exchange of ideas and creative expression outside of state-approved and official artistic routes (99). Moreover, every statement listed on the manifesto was accompanied by an appendix listing the names and addresses of persons invited to be co-creators of NET. Cognizant of bureaucratic red tape, the artists ensured their proposal adopted an official aesthetic. The distinctive blue block lettering of the header “NET,” achieved by carving the letters out of rubber, was part of a strategy designed to dupe censors or inspectors at the post office into thinking that the letter had been issued by an officially supported organization of some sort, and not meriting closer scrutiny. Furthermore, their decision to sign the document added to the bureaucratic “look” they sought to cultivate (100). According to Kemp-Welch, NET worked because of a system of permanent recommendation and expansion as it travelled from place to place (104). The inclusion of NET in Kemp-Welch’s exploration highlights how mobilization is conceived by the author and aptly illustrates how artists transgressed boundaries to partake in global artistic conversations.

“Points of Passage” examines the years between 1972–1975, focusing on artistic hubs such as homes and studios where unregulated artistic activity ensued. Kemp-Welch dedicates a large segment of this section to Hungarian artist duo KwieKulik’s (Zofia Kulik and Przemysław Kwiek) apartment in Warsaw — an important hub where artists, curators, and art historians could collaborate and document their activities. While spaces such as KwieKulik’s apartment generated encounters, the third and final section of the book, “Convergences,” looks at how artists from around the Soviet bloc joined, or converged, within the framework of shared exhibitions and events. Here, Kemp-Welch examines experimental poetry and performance and focuses on other alternative spaces such as artist-run centers that emerged to cater to an expanding international field of young artists and interested viewers, particularly in Poland. The author revisits the role of KwieKulik’s apartment and its position in exhibiting and hosting artists directly, primarily in the context of documenting and archiving the artistic activities that took place. Since the distribution of those documented activities aided in furthering the networks created, Kemp-Welch brings into full-circle her three sections of mobilization, points of passage, and convergences, as situated in KwieKulik’s apartment. That is, the act of mobilization finds itself developed on a local basis within the apartment by drawing in artists from neighboring countries. The apartment becomes a point of passage in its existence as a central hub for encounters to happen and through many shared exhibitions and events, significant convergences flourished which resulted in an expanding international field of young artists whose activities were documented outside of official state-run circles.

At the beginning of her exploration, Kemp-Welch argues that experimental art from the Soviet bloc served as a testing ground for sociologist György Konrád’s question: “How can we strengthen the horizontal human relationships of civil society against the vertical human relationships of military society?” (4). However, her theoretical speculations could benefit from further examination. To better strengthen the arguments made in Networking the Bloc, additional theoretical engagement may provide insight into Konrád’s question. Deleuzian conceptions regarding relationships among humans, things, and the spaces they inhabit come to mind. One such theory is Gilles Deleuze and Félix Guattari’s writing on smooth and striated space as referenced in their landmark book A Thousand Plateaus. Smooth and striated space, as conceived by the two philosophers, is based on the manner in which events and movements take place.3 In short, striated space is linear, systematic movement from one place to another, while smooth space is a more continuous, amorphous, meandering movement and journey. In the context of Networking the Bloc, state-approved artistic circles might be considered as an orderly “striated” function of government attempts to monitor travel and communication, while instances such as NET cut into the “striated” space of bureaucracy by adopting red tape procedures in order to allow for “smooth” spaces of collaboration and exchange to flourish (as evidenced by KwieKulik’s apartment). This type of interjection into striated space supports Kemp-Welch’s dedication “to weave together a wide selection of minor narratives challenging the idea that experimental artists in the Soviet bloc operated in isolation” (410).

Engaging on a deeper theoretical level not only aids in addressing processes in the social, political, and geographical life of the artists, but conversely reveals the way theory provides important insights into the artistic practices set forth in this book. It also returns to Frigyes Karinthy’s questions posited around the theory of “Six Degrees of Separation.” Karinthy reflects: “How can I link one phenomenon to another? How can I join the relative and the ephemeral with steady, permanent things – how can I tie up the part with the whole?” He lyrically articulates the process as “one of contraction and expansion which is beyond rhythms and waves. Something coalesces, shrinks in size, while something else flows outward and grows.” By challenging the idea that artists in the Soviet bloc operated in isolation, Kemp-Welch presents a constellation of encounters and events that offers a much more fluid and open arrangement of artists and movements. In exploring the many routes of interconnection and exchange, Networking the Bloc underlines the dynamism of experimental art in eastern Europe, as well as offers readers a complex and multifaceted series of narratives in the context of global art history.