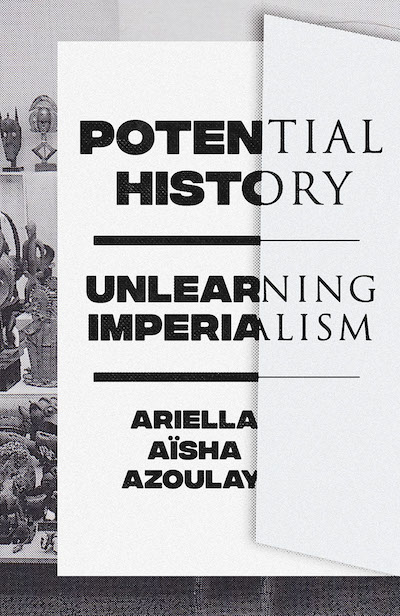 With the urgency of a manifesto and the volume of a brick, Ariella Aïsha Azoulay’s recent book Potential History: Unlearning Imperialism foregrounds and rejects structural, sustained imperialisms as the basis for a shared world and asks readers to begin the ongoing project of actively challenging imperialism’s alleged inevitability.1 Such a turn to history might seem strange to those attentive to the recent nostalgia politics around the globe or those who fear that unlearning imperialism means an annulment of its inventory of traumas. Just as much anti- and ante-imperialism, Azoulay is clear to distinguish her call from selective nostalgia or amnesia. Unlearning Imperialism means, instead, to reject a temporality that consigns violences to a remote past; to see resistance and contestation present at every step of imperialism’s longue durée; and to amplify dormant potentialities crushed in imperialism’s forward drive.

Azoulay can be a challenging photographic theorist, largely because photographs for her are not strictly essential to the study of photography. This decoupling, which she outlined in her last book Civil Imagination, allows for photography to occasion political theory.2 Azoulay builds on this work here, particularly as she develops the camera’s shutter as an imperial operation that instantly “draws three dividing lines: in time (between a before and an after), in space (between who/what is in front of the camera and who/what is behind it), and in the body politic (between those who possess and operate such devices and appropriate and accumulate their product and those whose countenance, resources, or labor are extracted)” (5). To unlearn the operation of the imperial shutter is to insist on seeing past violences resound in the present, the distant “there” in the immediate “here,” and categories of “slave” or “refugee” as necropolitical corollaries of the “citizen.” Azoulay continues to be a provocative media theorist, suggesting that photography has its origins in 1492, the year of Columbus’s arrival in the Caribbean. In Potential History, however, the author considerably broadens her scope beyond photography to consider and critique art and its institutions: the work of art becomes “a synecdoche of imperial power”, the museum is founded upon looting, and the knowledge it generates is the basis of sustained violence (106).

One of Azoulay’s most impressive achievements is how the accrued momentum for the “onto-epistemological” concern of potential history pushes ever outward across the book’s seven chapters. Though she starts by considering tangible things and places—the looted object, the art museum, the archive—each chapter’s central concern grows increasingly amorphous. Later chapters turn to the discipline of history, sovereignty, human rights, and reparations. Azoulay connects it all methodically: the sustained looting of art objects cannot be dissociated from global migrant crisis; the archive, a technology that legitimizes a term like “refugee,” licenses life and death. Across some six-hundred pages, Azoulay accomplishes that rare thing wherein her call becomes more urgent and acutely resonant even as the contours and magnitude become less perceivable and more outsized.3 By the book’s end, she has thoroughly denaturalized the terms of political classification and made the claim for a worldly sovereignty beyond the nation-state.

A project of this scope is bound to face criticisms of parochialism or incompleteness. While Israel and Palestine remain a focal point, Azoulay frequently draws from the well of racial violence in the Postbellum South in the United States and elsewhere considers 1492, Algeria, and the U.S. occupation of West Germany. As for what is left out, she spends comparatively little time critiquing the university, at least relative to her consideration of art and the museum. For all her focus on imperial violence on the basis of state, racial, or sexual difference, issues of indigeneity and queerness as well as imperialism’s resonance in the regime of carceral capitalism are comparatively underdeveloped here. Potential History, however, does not aspire to be comprehensive. It instead outlines a project of ongoing unthinking to be continued in affiliation with those dispossessed of their art, access to the archive, and stake in a shared world. This is perhaps best on display in Azoulay’s idiosyncratic image interventions. For instance, when an archive put conditions on the publication of photographs, she opted instead to publish her sketches of them (Fig. 1). This intervention, one of many, embodies an attentive, deep listening that carries forth the book’s project through a disavowal archival authority.

Potential History was published in November 2019, amidst the ongoing efforts of Decolonize This Place but before a global pandemic that threw many museums into a state of existential crisis and a still-rising high water mark in the Black Lives Matter movement. Across modalities, increasingly common is the insistence on the fundamental insufficiency of a “return to normal” or mild-mannered reform. For her part, Azoulay offers brief chapter codas advocating for the transformative power of strike as a mode of refusal. Imagine, these sections ask, what going on strike would mean for museum workers, photographers, historians, and the governed until the world is repaired? The book closes by joining the chorus for reparations, something the author describes as a holding open of the imperial shutter. Though that gesture may eviscerate the photographic image, Azoulay contends there is something to be found in that flood of light.