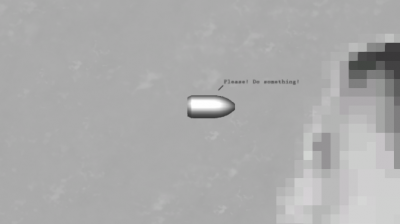 Bullet Hell (2012) is a side-scrolling 2D game in which the user controls the movement of a bullet. As with games like Canabalt and Robot Unicorn Attack, the object of the game is to prolong gameplay by avoiding collisions with the surrounding environment, and as gameplay progresses the game stage moves faster and faster until the user inevitably “fails” or “dies”. The game is driven by a core loop that revolves around a central decision point: should the user intervene and move the bullet? If the bullet is not moved, it will strike its target and then the game will rewind to the beginning and automatically begin again. This means that the game will loop indefinitely in the absence of user interaction, allowing users and spectators alike to approach the work as they would an animation or video installation. Thus, Bullet Hell explores the artistic potential of a popular game genre by removing its familiar feedback mechanisms—such as score, lives, music, and interface—and foregrounding its eternal recurrence and limited control-set.